Top 10 Countries Where Wind Turbines Are Used Most Efficiently

Wind turbine use is an excellent and environmentally friendly source of renewable energy. These are the top countries that have replaced polluting energy generators with earth healthy wind turbines. 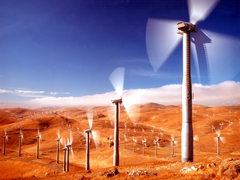 Many countries around the world have started using wind turbines for power generation.

Germany is one of the top countries when it comes to going green on the topic of energy. Around ten percent or more of the energy used by the population of this country is supplied by wind turbines. This power is harnessed very efficiently here, and helps to reduce the carbon footprint that the residents of Germany are leaving on the earth.

Power from wind turbines are used very efficiently in the United States, and this equipment is being placed in greater numbers here to further benefit the population, and break away from the dependence on foreign oil and fossil fuels which pollute the air and environment. Wind energy is a clean and renewable source of power, and this country is utilizing it in greater amounts than ever before.  Unfortunately, the U.S. has slipped in position as Germany takes the lead in this alternative renewable energy race.

Spain has jumped in position from number six to number three. The previous statistics of just eleven percent of the power used in this country supplied thanks to these turbines has also jumped. Spain has always shown an inclination towards environmental protection and green power sources, and the high use of this equipment just reaffirms this commitment to green power for the future.

India may be considered a developing or third world country, but when it comes to wind energy this country is one of the top ten. Five percent or less of the power needed for the country is supplied by the wind, but this percentage increases steadily each year. In the near future India may surpass larger and more developed countries where alternative energy sources are involved.

China is considered by many to be very environmentally unfriendly, but this is changing quickly. Wind turbines installed here work very efficiently to provide the energy needed by the billions of residents, and their use is being increased at a very rapid pace. The high population means finding alternative power sources which are renewable and inexpensive, and this technology meets these needs in an efficient manner. China has also jumped in position and if their investments continue, may be leading the pack soon.

Denmark has always been known as a place where the environment is important, and this is one of the most efficient when it comes to alternative energy and using wind turbines as well. Around one fifth of the power that is used by the residents here is provided from this equipment, and this country does not suffer from the pollution, smog, and other problems which are evident in other places around the world. Denmark also has moved up the ladder in their position on this list.

Italy is a beautiful place to visit or live, and it is very eco-friendly as well. Wind turbines generate energy very efficiently here, providing a portion of the electricity used in homes and businesses while keeping the beauty and landscape undamaged.

France has a history of energy efficiency, and this is also true when it comes to using wind turbines to generate electricity which is environmentally friendly. This country generates around one percent of the energy used by the population from this alternative source, and other renewable sources like ocean power and nuclear generation are used as well.   Unfortunately, Italy has fallen from the number four position to number eight. A major reason may be due to difficult economic and politic times in that country.

The United Kingdom has a significant number of wind turbines in use, to harness this natural energy source and provide much needed power. This country has many areas which see high wind averages all year long, and this makes this power source extremely efficient when the equipment is placed in the right locations. Between one and two percent of the annual consumption of this country is provided using this alternative source.  The United Kingdom has also lowered their rank on the list, falling from number five to number nine.

Portugal may be a small nation, but it has a big impact when it comes to alternative renewable energy sources, and this includes wind. More than eleven percent of the electricity supplied here comes from this one source being harnessed efficiently.