Wind activity depends on the season and area. Every area has its own peak wind season. In case of lightning, wind turbines activate a protection system that transfers high voltage so as to avoid being damaged. 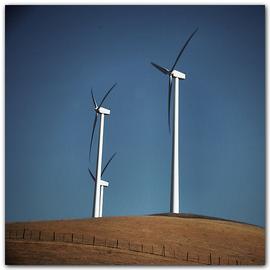 Alternative energy sources are the key to survival for not only the earth, but mankind itself. In our search for alternative energy, we need to reach back into our past for tried, true and safe sources. How old is windmill energy and what other benefits can it bring to us?

Wind doesn't only produce such powerful forces like tsunami waves; it can also produce energy that can be used by people. In fact, wind was used by people several thousands of years ago by means of sailed ships and windmills that grinded grain. Today, when our world is in need of energy, wind power has received worldwide recognition. Wind turbines, which we use today, produce electricity. Even though the electricity produced by wind turbines doesn't exceed 1 percent of the world electricity use, it is a growing segment in the world energy market.

What are the benefits of wind energy? First of all, producing energy by means of windmills and turbines doesn't create any pollution that can be released into the air or water. It doesn't contribute to global warming. Wind energy is a renewable energy, which means that it can be restored. Fossil fuels, for instance, are not renewable; these are coal, gas and oil.

The use of wind energy in the United States reduces reliance on imported fuels. Plus, it creates new jobs for people living in areas near wind turbines. Wind turbines don't take much space for installment, which provides more space for farming and other needs. Each turbine tower occupies only 200 square feet on a concrete pad. It doesn't require much time to install a wind energy center either. It takes only three to six months. Since wind energy has started to be used, its cost has decreased, making wind energy a competitive market, not only from an environmental point of view but also from financial point of view.

Wind turbines have a propeller that has two or three blades. This propeller is set on a rotor. Wind turbines are atop towers 30 meters or more above ground. Wind makes the propeller move and the rotor starts turning. Finally, mechanical power converts into electrical power, which is cabled to the turbine tower. The electricity produced is transferred to a substation and to an electric grid.

Three hundred homes can be provided with electricity produced by one wind turbine. In 2007, 16,800 megawatts were produced in the United States by wind farms. This power can serve as many as 4.5 million American homes.
As we can see, wind energy has its obvious benefits and potential to grow. Even though we are unlikely to solve energy issues by means of wind energy in the world, still, some areas where wind turbines are installed have protected their residents from a potential energy crisis already.