Wind power can produce large amounts of energy when the wind is strong. At these times, there may be enough energy generated to power your home and all your other electric needs. If you generate enough wind power, utility companies may buy it from you. With the cost to purchase the initial equipment, however, it does not make sense financially to put up wind turbines except in areas that see high wind activity. 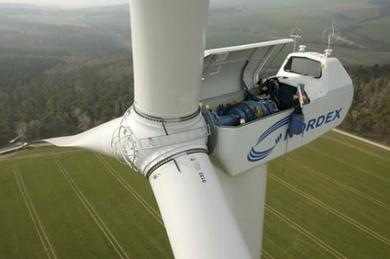 Energy produced by wind power is a renewable alternative energy source that is environmentally friendly and an alternative to non-renewable and environmentally hazardous fossil fuels. Using wind power has both advantages and disadvantages. People have had the ability to harness the power of the wind for hundreds of years, but newer technology can make it much more efficient. One of the biggest problems with wind energy is that it cannot be created on demand. The wind blows off and on. If it is not blowing, then energy is not being produced. Storing wind energy is also very difficult and can be expensive.

Wind power is turned into energy with the help of wind turbines. These machines have at least two very aerodynamic blades. When the wind blows, these blades spin quickly, creating the energy needed for the process that creates electricity. Wind turbines can capture between 5 and 45 percent of the wind's energy, and wind farms can be very effective in supplying power needs as long as the wind continues to blow. If the wind stops, however, energy production ceases as well. This is one reason that wind power is not more widely used.

Wind turbines must be carefully located, particularly in areas that get a significant amount of high wind activity. These areas are normally remote, so transferring the captured energy may mean installing miles and miles of electric lines, which can be very labor intensive and costly. Depending on where they are installed, wind farms have the potential to supply a large amount of energy, but the initial cost to buy the equipment can get expensive very quickly.

Wind energy, just like other alternative energy solutions, can play an important part in creating energy that is environmentally friendly and produces no harmful carbon emissions like burning fossil fuels. A problem arises with it's time to store the energy, however, such as when a lower demand occurs. Batteries to store the excess electricity are a very cost-prohibitive solution because of the sheer size that would be needed for the amount produced and the high expense involved. Research has been conducted into alternative storage methods that may be effective, but for right now, wind power must be supplemented for times that the wind dies down or more energy is needed than the wind turbines can create. This does not mean that wind turbines do not have a place in a green energy program; it's just that right now, relying solely on wind power as an energy source is simply not feasible; though if you own a home and you live in an area that gets a high amount of wind activity, you could save money on electric bills by installing some wind turbines.
Wind can be used as an alternative to fossil fuels for energy needs, but the technology needs to be further developed concerning the storage of this energy before wind power can be used as a primary energy source.