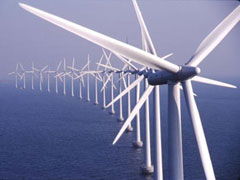 1. Thousands of years ago wind power was utilized. Egyptians were the first to use wind energy way back in 3200 BC. They invented the sail, which was used to capture wind energy that powered their boats.

2. In 1920 hydroelectric power was a conspicuous energy source. This is because in that time the energy costs were very low. About 25 percent of all of the United States’ electricity was generated from hydroelectric power. Now it is significantly lower.

3. Sicily was saved by energy from the sun. In 213 BC Archimedes implemented a very unusual plan to save Sicily. He used mirrors as a tool to focus and reflect the sun’s energy straight onto the ships of the Romans, which set the ships on fire.

4. The windmill invention. Win turbine power was invented in China and they were used around 200 BC to grind materials such as plants. Their design has changed little to this day, although the windmills, or turbines now serve a different purpose: to generate renewable energy.

5. The discovery of photovoltaics. In 1839, Edmond Becquerel discovered that when sunlight is absorbed by some materials, they can produce electricity. This made alternative energy costs lower.

6. The debut of hydropower. Hydropower was first used by the Greeks some time in the BC era. Water was used to turn large wheels, which were used to grind wheat into flour.

7. The first solar-powered water heater. The first water heater that used the sun’s rays was built in 1391. Clarence Kemp from Maryland invented it and named it the “Climax”.

8. Alternative energy communities. Currently the U.S. is working with China to build whole communities that whose electricity is supplied purely by alternative energy sources. Homes are powered with geothermal and solar energy and are made of straw bales.

9. Tree fungus – a new alternative energy source. Patagonia’s rainforests have shown promising results in being a reliable source of biodiesel. They are full of fungus, which release certain enzymes when exposed to low oxygen conditions. These enzymes contain long and heavy chains of hydrocarbon that are like the ones contained in oil.

10. Algae as a source of biofuel. Some strains of algae can contain high levels of oil, which can be used to produce biodiesel, just like the tree fungus mentioned in the previous fact. The main advantage of using algae as a source of energy is that it does not cut into the food supply.

In the nineties only about 7.5 percent of all energy in the U.S. came from renewable sources, but the amount available was about 250 times more than that consumed.
Currently wind energy in the U.S. can generate electricity for 600,000 U.S. families.
The largest turbine in the world is located in Hawaii. It is 20 stories high, and the blades of the turbine are the length of a football field.