Can Hurricane Power Be Used As Energy Source?

The biggest problem with using powerful hurricanes as an energy source is determining how to harness these destructive forces efficiently. Because of the very high winds and powerful forces that these storms have, the normal wind turbines commonly used would not be able to withstand the forces, and would most likely break apart and be useless. A more effective way to do this would have to be found before using the hurricane winds for an energy source. As technologies advance, this is a possibility. Wind energy benefits can be one of the answers to global warming, and a dependence on fossil fuels and other energy sources that are not renewable, and in the near future technology may catch up and make it possible to use powerful hurricanes as an energy source. This will eventually lower wind energy prices, making them more affordable, and renewable wind energy is a big part of the solution to global warming and pollution. 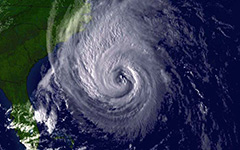 Powerful hurricanes seen in the last ten years have been very destructive, but these hurricanes also have the potential to be used as an energy source, if their energy can be harnessed. Hurricanes release energy, and in one day the amount of energy released by a single hurricane is enough to equal the amount of electricity consumed in the entire world for a two hundred day period. Hurricanes last for more than one day, and they continue to build as long as the ocean water is warm enough to supply the energy needed. Once a hurricane reaches cooler water or land, the energy source is gone and the hurricane will slowly diminish and release less energy.

Powerful hurricanes hold an enormous potential as renewable energy sources, and one aspect of these storms is the renewable wind energy that can be harnessed. Wind turbines have been in use for years, and wind turbines at sea have shown significant potential concerning wind energy benefits. The ocean is an open space, which means that there are no obstacles to slow down or block the wind over the water until it hits the land. This allows the wind to gain more energy, and wind farms that are located offshore can produce large amounts of energy in good weather. The amounts of energy that could be harvested during powerful hurricanes and tropical storms could be enough to supply the world with electricity all year long. The possibility of harnessing the power of the wind from powerful hurricanes can be an answer to the energy crisis, global warming, and the dependence on fossil fuels and foreign countries.

Wind energy generation is one of the most promising sources of renewable energy, but there are some issues that must be worked out before the winds from powerful hurricanes can be used as a source of energy. Hurricanes can have winds that travel more than one hundred and fifty miles per hour, and the usual wind turbines that are used for wind energy generation may not be able to stand up to the fury of powerful hurricanes. To be able to harness this energy, stronger turbines would be needed, ones that are extremely tough and could stand up to substantial force. The most powerful hurricanes are category five hurricanes, and these can be deadly if they hit land. These storms can be very wide, stretching across hundreds of kilometers, and they are powerful enough to destroy huge cargo ships with the winds and the surges in the waves. A category five hurricane has winds that reach more than one hundred and fifty five miles an hour, and this could cause significant wind energy generation if harnessed.

6 Responses to “Can Hurricane Power Be Used As Energy Source?”