Green car races are a great way for fans and others to enjoy auto racing without causing damage to the environment simply for entertainment purposes. With all the damage that has been done already to our planet, any time a vehicle uses biofuels in place of traditional fossil fuels it is an improvement that can make a big difference. The rest of the world sees that biofuels are a viable alternative in any car, whether it is a race car or a family sedan. After all, if biofuels can help Audi win races in the LeMans racing series, using biodiesel in all three of their cars, then any car can perform just as well if not better using biofuel instead of fossil based fuels. Green car races are becoming more popular as the trend catches on. 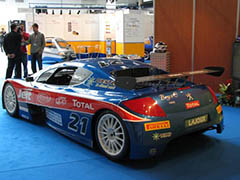 Biofuel car races are becoming more common in the auto racing world, and these races are an important example for the rest of the racing teams. Biofuel race cars have come in first several times, and both ethanol and biodiesel racing offers many benefits to the sport and the environment. Green car racing is a concept that makes racing much less polluting and harmful to the environment. Either ethanol, biodiesel, or both are used in almost all the races now, and this is a big change from even ten years ago. More racing teams are starting to understand the impact that car racing has on the environment, and they are turning to biofuel car racing to rectify this.

Biofuels are much less harmful when it comes to emissions into the air, because traditional fossil based fuels like gasoline and regular diesel have high sulfur and carbon emissions, as well as other greenhouse gases. Biofuels burn much cleaner, with few to none of these global warming causing emissions, and this is much better for the earth and environment. These fuels do not reduce any of the energy or power that is needed by the race cars to reach first place though. This makes biofuels a safe and friendly alternative that does not affect performance or efficiency.

Biofuels are made from biomass, which is cellulose material. This includes plant and animal matter. Ethanol is an alcohol based fuel, while biodiesel works by using oils and fats. Green car races are the wave of the future, and racing teams are getting in early. All it took was for the first biofuel race cars to finish in good positions, and show that these fuels are competitive and do not change the speed or performance of the car and engine. Once this happened them more racing teams started switching to fuel blends that include biofuels in the mix. Biofuel car racing proves what Europe has shown for years, that biofuels are a safe and eco-friendly alternative to fossil fuels, and biofuels will eliminate most of the damaging emissions and environmental damage that can be caused by auto races.

The future of car racing is green car races. With the importance of the environment and the fact that resources for fossil fuels are limited, race cars will have to make the transition to alternative fuels that are kind to the earth and air sooner or later. The development of advanced technology in biofuels and cars means that renewable alternative fuels are an option now, even in the fast lane of auto racing. That may not have been the case ten years ago, but as Audi, Puegot, and other race cars and racing teams have shown, it is certainly the case today.