Renewable Fuel: The only answer to saving ourselves and the world

Biofuels are domestically produced derived from 100 percent renewable resources. In comparison to petroleum and gasoline, biofuels reduce harmful carbon dioxide emissions and produce equivalent performance. There are two known strategies for producing biofuels. The first is to grow plants that are high in vegetable oil, like algae, palm oil, or soybean oil. The thickness is reduced by heating the oils; thus, they may be burned in a diesel engine, or they may be chemically produced into fuels like biodiesel. The second strategy is to grow corn or high sugar crops such as sugar beet, sugar cane and sweet sorghum. Yeast fermentation can be used for the production of ethanol, also known as ethyl alcohol. 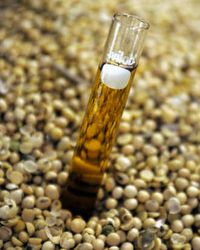 About 86 percent of all primary energy production in the world comes from the burning of fossil fuels in 2005. By products of this process are carbon dioxide and other greenhouse gases. Greenhouse gases (GHG) allow solar radiation to get into the atmosphere and to reach the surface of the Earth. GHG function like a blanket in that they help retain heat in the lower atmosphere, keeping the Earth warm and habitable. This natural phenomenon is called the greenhouse effect. A problem arises, however, when there is an excess of carbon dioxide and other greenhouse gases, which heighten this natural effect and cause global warming.

The increasing carbon dioxide level presents a serious climate threat. Fortunately, there are ways to decrease this level. One alternative is the use of bioenergy, which can be produced from renewable fuel, also called biofuel. Biofuels are produced from renewable biomass materials. Using renewable fuel reduces the carbon dioxide output by up to 78 percent. Biofuels are being used globally, generally to power vehicles and cooking stoves.

Some ecologists suggest another renewable burning energy alternative: hydrogen-powered cars. Right now those cars exist mostly as prototypes and cost hundreds of thousands of dollars. Why spend money alternative fuel cars when you can simply change to renewable burning biofuel?
When renewable fuels are used, it demonstrates a commitment to the environment, safety and health. Biofuels have many advantages over fossil fuels:

2 Responses to “Renewable Fuel: The only answer to saving ourselves and the world”