Like ocean currents, air currents help move heat and moisture all around the globe. Typically, hot air moves faster than cold. Of course, this only contributes to the rotating speed of a hurricane. At the same time, heat trapped by greenhouse gases will alter the driving winds that determine where hurricanes move. This most likely creates a situation where hurricanes will strike land as opposed to staying in the oceans. Notice that almost every hurricane or tropical storm this season has struck land. 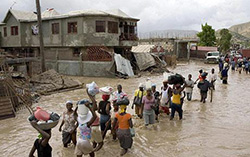 Unfortunately, some scientists feel that Hurricane Ike and the devastation it caused was unusual. There is no question that hurricanes will get worse as greenhouse gases continue to trap heat and raise surface temperatures. In order to understand this, you need to look at three side effects of global warming and how they directly contribute to hurricane formation.

Sources of Heat and Ocean Currents

Today, most people think of the sun's rays simply as the Earth's primary heatsource. Few realize that the shifting of plates which cause earthquakes and volcanoes also supply heat to the ocean floors. Unlike sunrays, these processes may play a key role in the motion of ocean currents, which in turn, aid in the development of hurricanes and tropical storms. When combined with the steadily rising temperatures of the water, increased current rotation inevitably creates more hurricanes with larger sizes and stronger organization.

Although water can absorb more heat than almost any other molecule on Earth, it has limits. A temperature increase of one degree translates to an enormous amount of heat. And, the heating effect doesn't add up in a neat, orderly way. Instead, a sort of domino effect ensues.

Once polar ice caps start to melt, the whole process speeds up. Hurricanes have more water to feed on so rising water levels will flood crucial coastal areas. This also makes it possible for hurricanes to travel further inland. That said, these coastal areas were developed over millions of years to endure forceful oceanic currents, which means that inland areas will only erode faster.

Changing Air Currents
There is no question that Hurricane Ike was one of the largest hurricanes in recent history. On the other hand, we have not yet seen the full extent of raising water levels combined with hot air and water circulation patterns.

One Response to “Hurricane Ike: Small can still mean powerful”