What additional information do you need on the impact of global warming on the earth?

Global warming research has discovered more hidden effects that were previously not known or considered. What are the real threats to civilization and the world as our earth heats up? 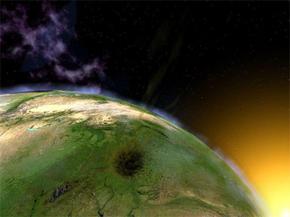 Last year we wrote an article on the impact of global warming on earth. Here is an updated version of that article with additional information.

The impact of global warming is already being seen around the world. Record temperatures in many parts of the world this summer point to more than just localised temperature fluctuations, but to the more global trend that has been observed over the last 3 decades. Despite efforts on behalf of some countries to reduce greenhouse gas emissions, such as the Kyoto treaty, the world as a whole is pumping out more and more carbon dioxide every year. Yes, countries like Norway and Holland are meeting their goals to reduce emissions, but this is small fry when countries such as China and India are pumping out more and more every year.

The effects of global warming that have been witnessed this year are record temperatures and dry spells in countries like Russia, and record rainfall in countries like Pakistan. As a result, Russian crops have failed like never before, and hundreds of thousands of Pakistanis have lost their homes, or worse, been killed. These incidents, however, are still localised ‘unpleasantaries,’ and most parts of the world has ticked on as normal.

The real impact of global warming is likely to be witnessed further down the line. As things are, there is not much to worry about. The problem is that we are reaching a tipping point in which the heating up of the earth is producing self-reinforcing loops which will heat up the earth yet more, such as the release of methane (a greenhouse gas) from hydrates in coastal sediments.So whilst we do not have to worry about our well-being right now, if we do not take drastic measures right now the next generation is likely to suffer greatly.

The IPCC has concluded that global temperatures will likely rise by from 1.2 to 6.5 degrees C (2.5 to 12 degrees F) by the end of the century, depending on different scenarios regarding greenhouse gas emission. This will lead to a sea level rise and huge changes in the volume and pattern of rainfall. There is likely to be more frequent intense weather events, including hurricanes, tsunamis, and blizzards etc.

Global warming effects will include changes in agricultural yields, the continued melting of glaciers, and species extinctions. An important impact will be a significant slowing of the gulf stream, which brings warm water to the North Atlantic. As a result of this, the relatively warm countries of western and northern Europe will, ironically, eventually become as cold as other places on the same latitude, such as Labrador, Canada.

The unfortunate reality is that predicting the impact of global warming is notoriously hard. It brings a whole range of scientific disciplines together, such as oceanography, meteorology, and geology. Whilst no one can agree on the exact impacts for specific regions of the world. All scientists agree global warming will have numerous negative effects on our planet and our way of life. For the original article and further information on renewables and non-renewables, click here

14 Responses to “Impact of Global Warming on Earth – updated article”