The Impact of Global Warming on Forests

The impact of global warming on forests around the world will vary according to the opinion of different scientists, as is the case with most global climate change issues. (To read about Google earth and climate change, click here). For some forests the increased rainfall, warmer weather conditions, and carbon dioxide fertilization effects will actually be beneficial. At the same time, the effects of global warming on forests in other areas will be detrimental, with increased pest outbreaks, forest fires, and drought.

Most typically, the impact of global warming on forests considered temperate should be minimal. However, there are large regional risks, which are still an issue. It is likely that productivity will increase in forests that are temperate and closer to the poles, and that it will decrease in those bordering the subtropics. Storms are projected to be more numerous as well, which could cause serious disturbances. 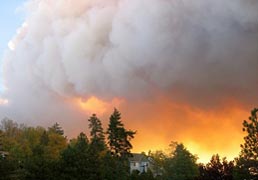 The United States has more than twenty types of forests across its continental part, and the forest ecosystems here are expected to respond to climate change in various ways. The increase in temperature that is projected for the next couple of decades will likely mean that many of the species found in these forests will migrate about 200 miles north. If climate change takes place slowly enough, then tree species found further south will have a chance to colonize the north. The long-term effects of global warming will only be evident when we can see the pace at which the north is being colonized by trees from the south.

Tropical rainforests (To read about the loss of tropical biome, click here).

Global warming may also lead to a lack of sufficient rainfall in other areas (along with other effects), and this may lead to forest cover being lost in southern and tropical areas, since tropical rainforests require a lot moisture in order to survive. In addition, the higher temperature that are expected will cause the photosynthesis rates of plants to decline. This may put a cap on plant growth and the rainforests will not be as capable to sequester carbon dioxide as a result.

Moreover, climate change and global warming have a largely negative impact on rainforest animals. Some tropical species like amphibians are already becoming extinct, and many more species of animals and plants are projected to be put on the danger lists of complete extinction in the 21st century.

For more information on global warming, go to:
http://en.wikipedia.org/wiki/Global_warming
http://globalwarming.com/