What additional information are you looking for on the topic of investing in renewable or sustainable energy?

Are our renewable energy storage methods ready for the wind and solar energy boom?
Setting up biorefinery systems for a future in biodiesel and ethanol production
5 green jobs to get excited about in the next decade
Biodiesel production: one of the top hot priorities for the energy industry
Cost and ROI of biomass feedstock energy
Geothermal energy companies become an endless source for renewable energy
Why more businesses are going green
5 ideas on how we should build our renewable energy policy

Over the last number of years, the U.S. government has focused on wind and solar as the main sources for renewable energy. Other forms of renewable energy went veritably unnoticed.  The US government’s green energy attention is finally turning to geothermal energy and it’s getting the respect it deserves. For 2011, the Department of Energy  unveiled a budget request topping $28 billion, $2.4 billion will be devoted to renewable energy (5% more than the previous year), and out of that the advanced geothermal energy program will receive a 25% increase over the previous year. The Department has found that geothermal has yielded the biggest returns per dollar invested compared to all of the types of green energy, and in addition $3-5 billion was set aside for loan guarantees for advanced geothermal projects such as ETS. 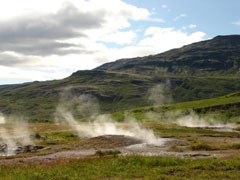 If you are interested in investing in the geothermal energy industry, you should know as much as you can about the problems associated with the current technologies, and what is being done about it. In short, you need to know where the industry is going. Here are two recent advancements in geothermal technology that point to what I believe, and that is that geothermal is going to be the biggest green energy source for future generations.
Geothermal technology advance 1 - Money from the Department of Energy helped U.S. scientists at the Pacific National Lab make a geothermal breakthrough, in which a new method of capturing a lot more energy from "weak" (lower temperature) geothermal resources was found. The method makes use of the properties of a new biphasiv fluid, which expands and contracts rapidly. Moderate heat brought to the surface is sufficient to enable this fluid to power a turbine.

Advance 2 - In summer 2010, a Canadian company called Heatline introduced breakthrough geothermal technology. The company has developed highly efficient geothermal transfer systems which can supply heat pumps with fantastic geothermal energy transfer capability. This system is about 1/600 the size of the traditional loop system (which can involve the installation of hundreds of feet of piping). The larger systems have such high ecosystems effects that they have been banned in some areas. The Heatline system overcomes theses hurtles.

Research has suggested that $1 billion invested over the next 15 years, and 100 gigawatts of energy could be supplied by geothermal by 2050. With the appealing interest of the government towards investing in geothermal energy, this just might be the best time to add this to your portfolio.