Wind Farms in the United States – The Benefits, the Largest and the Newest!

The interest in wind energy as a renewable energy supply in the U.S. has risen substantially over the last few years. The completed capacity in the U.S. installed capacity was over 40,000 megawatts at the end of 2010, which puts it at number 2 behind China. Currently, 3 percent of the total electricity generated in the U.S. is derived from wind power. 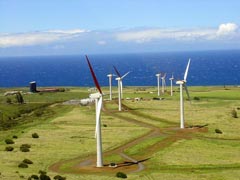 The benefits of wind farms
Wind power is a renewable resource that is very clean, is available domestically, and this  can substantially help the United States meet its economic and energy needs. The wind industry in the U.S. generates billions of dollars through economic activity, as well as tens of thousands of jobs. Local taxes are boosted via wind energy projects in the U.S..  Rural community local economies are revitalized, since farmers get a steady stream of income just by putting turbines on their land. The largest turbine manufacturer that works domestically is GE Energy. (To read more about the benefits of wind power click here).
Wind farms in the United States are spreading. For 2011 there wer 5,600 megawatts worth of projects implemented. The US Department of Energy claims that wind energy in the U.S. will supply as much as 20 percent of the country’s electricity needs by 2030. (To read about alternative energy finding in the US click here).
The largest wind farm in the US
There are many wind farms in the United States. The world’s largest is in Texas – the Roscoe Wind Farm – and it has a capacity of 781.5 megawatts. It consists of 627 Mitsubishi, General Electric, and Siemens powered wind turbines. In 2009 this wind farm surpassed the Horse Hollow Wind Energy Center. Four Texas counties are involved in this wind project, which covers an area roughly the size of Manhattan.

More approved wind farms in the U.S.
Another wind farm in the US that was approved is located 5 miles off the coast of Massachusetts, a project that faced years of opposition from local Native American tribes. This is considered by supporters to be an enormous step for alternative energy in the U.S.. Although its production is considered rather small, the facility is projected to generate enough electricity for 400,000 houses. The fact that this got approved is quite encouraging for other offshore wind projects awaiting approval for the Great Lakes, and more for the East Coast.

Lake Erie is the next one to host one of the initial US wind farms. Plans have been underway for a long time now to build a wind power site somewhere on the Great Lakes. It all started with the MOU – the Memorandum of Understanding – which was signed by the Lake Erie Energy Development Corporation and GE Energy.

In the last few years the wind energy generation in the United States increased by 27 percent, which is about 2 percent of the total supplied electricity in the country. 85,000 jobs in the U.S. are supported by wind power. So, renewable energy projects like wind farms not only helps combat climate change, but they also play a key role in economic recovery by creating more jobs.
The U.S. states that are showing the greatest growth in wind power are: Texas, Iowa, California, Minnesota and Illinois. The U.S. states that are benefiting the most through use of current wind power productions are: Iowa, North Dakota, Minnesota, South Dakota and Kansas.