Railroads are the bloodline of the country: their future in biodiesel

The future of the railroad business lies in using alternative sources of energy which are eco-friendly but are still cost efficient and perform effectively. The answer is biodiesel fuel. This fuel cuts down on carbon monoxide release by almost fifty percent, and almost sixty percent less hydrocarbons are put out into the air from biodiesel. There are no sulfur components in biodiesel, which eliminates the risk of acid rain problems, and almost eighty percent fewer carbon dioxide emissions are produced, causing far less harm to the environment. Biodiesel cuts particulates released into the air by more than half over regular diesel, and there are significantly less toxins released as well. Biodiesel is the answer for trains of the future and the railroad business, and some trains and companies are starting now. 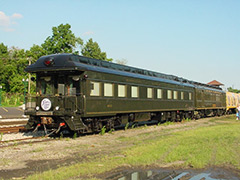 Biodiesel may be the future of the railroad business, and some trains are getting a head start on the change. Tri-Rail commuter trains, in Pompano Beach, Florida are just some of the trains that have made the switch. Biodiesel fuel offers many benefits over coal or oil based products, like regular diesel fuel. Biodiesel fuel is a fuel made from biomass, and it is much friendlier to the environment than most other fuels. Using biodiesel in trains makes good sense both for the environmental impact and also for the financial savings that these trains will see. Using biofuels means that many railroad companies will be eligible for alternative fuel tax credits, which can significantly lower the amount of taxes the company will pay.

Biodiesel offers many advantages for trains and the companies that run them, but there are also disadvantages to using these fuels as well. Biodiesel fuel will not work as well in places where the temperature drops extremely low, such as Alaska and other northern areas, unless the fuel is kept warm. Southern areas, such as Florida, do not have to worry about this because the year round temperate climate means that biodiesel works as intended.

Biodiesel is a much cleaner fuel than either coal or diesel fuel. Both diesel and coal contribute greatly to the level of greenhouse gases when they are burned, and this is a major source of global warming. Using biodiesel instead of other fuels will cut down on these emissions by at least fifty to sixty percent. Global warming has become a serious concern, and many countries are setting limits on harmful emissions. Trains are a big contributor to the greenhouse gases and global warming, but this would change if all trains ran on biodiesel fuel, instead of pure fossil fuels like coal and petroleum based fuels.

Biodiesel fuel has many benefits to trains. In the case of an accident or derailment, biodiesel is much less harmful to humans and the environment, making any fuel spill much easier to contain and less harmful. There is very little pollution risk with biodiesel, unlike traditional diesel fuel which is very polluting if it is spilled. Biodiesel has far less emissions that harm the environment, and offers more power and a better performance for trains which use this biofuel. Another plus for biodiesel is the fact that it can be combined effectively with traditional diesel at times when biodiesel may not be available. Biodiesel has a flashpoint temperature that is more than double the flashpoint for diesel fuel, which makes it half as likely to catch fire or explode, and it is biodegradable as well.

12 Responses to “Railroads are the bloodline of the country: their future in biodiesel”