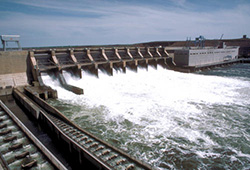 Hydro power generation is one of the oldest of all power sources used by man, but the technology used for this process has advanced significantly. In times past mills were powered by rivers, including grain mills and other ancient mills. This form of power is used to create almost one fourth of the electricity used around the world in the modern day, and the equipment used is somewhat different than that used long ago. More than one billion people around the world get electricity from hydro power, and more than thirty five million of these people reside in the United States. This is the most abundant power used that does not harm the environment, but it still only accounts for less than fifteen percent of the overall electrical generation in the USA. This leads a lot of room for improvement, especially since hydro power generation is environmentally friendly, does not pollute, and is very efficient.

How Does Hydro Energy Generation Work?

This power source requires a dam and a reservoir. In addition, turbines and generators are needed plus pipes, which are also called penstocks. Water flows from the dam and is channeled to the power generation area. This water drives the turbines and creates power, which the generators then turn into electricity. The electricity produced is transferred over to a substation for electrical power, where it is used to meet consumer demand. The amount of electricity generated during the hydro power generation process will depend on a few different factors. One of these factors is the height that the channeled water falls from, and this fall is referred to as the head. The higher the height is that the water falls from, the more electricity it will generate. Another factor that determines the amount of electricity generated is the volume of water that is falling or flowing. The more volume there is in the water flow, the more electricity will be produced.

8 Responses to “Pros and Cons of Hydro Energy Generation”