Pros and Cons of Ethanol Production

Ethanol is inexpensive to produce and it keeps engines clean and healthy, with less knocking. Ethanol is environmentally friendly and the production of these biofuel types can greatly benefit local and rural economies. With ethanol used instead of gasoline, the American people will no longer have to worry about foreign leaders slowing down oil production to increase cost, and since these biofuels can be produced locally, there should be no significant transportation costs. 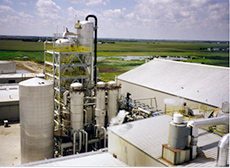 Ethanol has been touted as one of the fast and do-able alternative sources of energy. Is it truly the answer to fossil fuels? How is ethanol made? What are the benefits and are there any downsides to our focus on ethanol?

As of late, ethanol production has been in the news frequently, with some pointing out the pros while others are worrying about the cons. What are the pros and cons of ethanol production? First we must understand what ethanol is and how it is made. This biofuel can be made in different ways and there are different sources used to make it. There is corn ethanol and cellulosic ethanol, and there is a significant difference between the benefits and drawbacks of these two. Ethanol is a biofuel that is made from plant materials that are broken down during the production process into simple sugars and starches, which are fermented and processed into alcohol in a method similar to making whiskey or moonshine.

Corn ethanol is made from corn. With corn ethanol, greenhouse gas emissions are reduced by 13 percent compared to that of gasoline. Cellulosic ethanol is made from feedstocks like switchgrass, and with this type of ethanol, greenhouse gas emissions are reduced by 88 percent in comparison to gasoline. Obviously, cellulosic ethanol is a better choice than corn ethanol, but this biofuel will not be widely available on a commercial level for at least five to 10 years, according to researchers, because the technologies used to create it require further development.

Using ethanol does have a few drawbacks. Concern about the price is one of these currently, but that may not always be the case. Along both coasts, ethanol may cost more per gallon than gasoline because it is produced mainly in the Midwest, and transportation costs to other areas will push up the price significantly. If ethanol processing plants were located throughout the United States, the price would come down substantially. Availability is a problem with ethanol right now, because this biofuel is not readily available across wide areas. The major areas of availability are in the Midwest and along the west coast. Many large cities in eastern areas do not carry this biofuel at all. Currently, corn ethanol is the only type available, and this process is very energy intensive. It requires almost as much energy to produce as the end product will supply. This will also change with the advancement of new technologies that will affect the efficiency of production of corn and cellulosic ethanol.

On the other side of the ethanol discussion are the pros that these biofuels offer. Ethanol is an alternative energy source that is renewable because it comes from plant matter. Within six months, this energy source can be replaced when new crops are harvested. Ethanol can be used in combination with gasoline in regular gas engines and no modifications are needed when adding up to 10 percent ethanol. Slight modifications to a gasoline engine will allow ethanol to be used as 85 percent of the fuel combination compared to 10 percent. Ethanol will significantly reduce carbon emissions, particulates, other greenhouse gas emissions, and reduce air pollution. Ethanol could also be part of the solution to ending dependence on foreign oil and other fossil fuels for the United States because crops can be grown domestically.
Ethanol has many pros and cons, but when compared, these biomass energy fuels offer far more benefits than drawbacks. Ethanol may be one very important part of the solution when it comes to environmentally friendly renewable energy sources.