Fossil fuels will run out soon

Scientists are researching and developing alternative sources of energy in the event of this crisis. For example, they have developed nuclear power reactors that use the heat generated during nuclear reactions to produce energy. When they operate normally, nuclear reactors produce significantly less harmful emissions compared to fossil fuels; however, the nuclear waste from nuclear reactors is very dangerous to the environment and any living creatures, as the Chernobyl catastrophe demonstrated. Scientists have also developed methods to harness wind power and solar power. Both of these energy sources are environmentally friendly, but unfortunately they are much more expensive than producing fossil fuels and they only supply 5 percent of the world's energy usage. 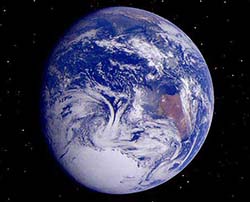 Energy drives our daily lives. Most of the energy that is produced today is generated from fossil fuels. The demand for energy is increasing every day. There are two key reasons for that: first, the population of the earth is growing at an ever-increasing rate and second, societies worldwide are becoming more and more industrialized. While energy demand is growing, fossil fuel reserves are being depleted. In about 50 years we will have depleted most of our fossil fuel reserves, so it is necessary to find alternative sources of energy before that happens.

Fossils fuels were formed many millions of years ago. They are the remains of plants and other creatures that once lived. Pressure and heat applied to those remains over the period of millions of years produced the most essential sources of energy that we use today: coal, gas and oil.

Coal is used for producing electricity and heat. Coal is a combustible rock that releases energy when it is burned. Approximately 6.2 billion tons of coal is consumed each year. The largest portion - about 75 percent - is used for electricity production. The United States uses about 1.05 million tons of coal each year. China generates 68.7 percent of its electricity from coal energy. Natural gas is used for electricity production as well and it doesn't produce as many harmful byproducts as other fossil fuels. The release of carbon dioxide (CO2) is also considerably less when natural gas is used instead of coal or oil. The burning of natural gas produces 30 to 45 percent less CO2 than coal and oil respectively.

The price of fossil fuels is getting higher every year. If the current consumption rate remains the same, proven oil reserves will last about 40 years. As for gas, it will be available for another 65 years if there are no interruptions in the supplies found in the Middle East and Russia, the world's largest gas and oil suppliers. Proven coal reserves should last another 155 years, but if we run out of gas and oil before then, we might have to use more coal to substitute energy sources. In that case, coal reserves wouldn't last more than 100 years. Also, the fossil fuel consumption rate is growing every year so we have even less time before the energy starvation begins.

One Response to “Fossil fuels will run out soon”