What additional information are you looking for on the topic of electricity? 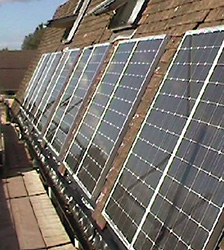 Electricity production basics are not as complex as they may seem at first. Electricity is widely used in many countries, for many reasons. Electricity can be produced in many ways, including using coal, solar power, wind power, several forms of ocean power, using hydrogen, and others, but the basic production of electricity always follows the same pattern. The start of electricity is electrons, which always have a negative charge. Every atom has at least one electron, often more than one. In a lot of materials, these electrons do not move and are bonded to the atom, which holds them in place. Some examples of these materials include wood, cotton, air, glass, ceramic, plastics, and many others. All material that contains bonded electrons like this can not conduct electricity efficiently, if the materials can conduct it at all. Materials like this are called electrical insulators.


Other materials, including almost all metals like silver, gold, and aluminum, do not have electrons which are bonded, and these electrons can travel around the material after detaching from their atom. Electrons that can do this are in a class called free electrons. Because the electrons can come loose and move, these materials are called electrical conductors, because they will conduct electricity through the material by the movement of the electrons. Without a conductor, electricity can not move at all. Another requirement for electricity is the ability to flow, and this is usually done with a generator. This piece of equipment enables the electricity to flow through the conductor. Generators work by utilizing a magnet and moving it close to the wire, causing the electrons in the wire to move and flow.

4 Responses to “Basics of Electricity Production”