Treating and blending the fractions is the last step in the oil refining process. The fractions are treated to make sure all impurities are removed. This is a necessary step to remove any water, nitrogen, sulfur, oxygen, dissolved metals, and other impurities. The first step in this process is to pass the fractions through a sulfuric acid column, which will remove any unsaturated hydrocarbons, oxygen compounds, residual solids like asphalt and tar, and nitrogen compounds. Then the fractions are sent through an absorption column, and this column has been filled with drying agents to take out any water in the fractions. The last step is to send the fraction products through sulfur treatment and hydrogen sulfide scrubbers. This step will remove any included sulfur compounds and sulfur. 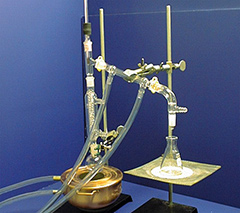 The oil refining process may seem very complex, with many complicated steps, but this does not have to be the case. The oil refining process for dummies can help you understand exactly how oil is processed, and why we need to move away from fossil fuels, including oil. The oil refining process starts with crude oil, which is what comes out of the ground. Crude oil can be thick or thin, clean or a deep black, and this substance contains hydrocarbons. These components are what causes harmful carbon emissions when gasoline and other fossil fuels are burned. Hydrocarbons make up eighty five percent of crude oil, and these molecules have both carbon and hydrogen atoms. Hydrocarbons can come in many different shapes, lengths, and structure types.

Crude oil starts out containing many different hydrocarbons, hundreds in all, and these are combined together. The hydrocarbons must be separated during the refining process, so that the different hydrocarbons are separate. This is started with a method called fractional distillation. Because hydrocarbons all have a different length in the molecule chains, they also have progressively increased boiling points as well. This means that using distillation will separate the individual hydrocarbons according to the chain length. Each component of crude oil will have a different weight, size, and boiling point. The crude oil is heated to the desired boiling point for a specific hydrocarbon. When the mixture reaches boiling, gases form. This vapor is then transferred to a fractional distillation column, which contains plates or trays. This column is cool at the top and warm at the bottom, and the plates or trays allow gases and vapors through. The plates will collect any liquids formed. When the vapor reaches a temperature in the column that is the same as the boiling point for that specific component of crude oil, the vapor will turn liquid again, and settle into the tray at that particular height in the column. Because each component has a distinct and different boiling point, similar hydrocarbons will be grouped together in the trays of the column.

Fractional distillation is only the first step in the oil refining process. The next step in the process of refining oil is chemical processing. This can be done using one of three different methods, cracking, unification, and alteration. Cracking involves breaking large hydrocarbon chains into smaller chains, or cracking the chain into pieces. This method can use thermal cracking or catalytic cracking. Once cracking is done the products are usually sent back through the fractional distillation process. Unification involves using smaller pieces and combining them to make larger products. Alteration is when the hydrocarbons are rearranged to make other hydrocarbons and products. This is normally done by a process called alkylation, where low molecular weight compounds are mixed when a catalyst is present, and this results in high octane hydrocarbons.
Once the fraction products are finished being treated, they are allowed to cool even further, and then combined together to make the final end products. These end products from the blending of the fractions include gasoline of all different grades, both without and with various additives, different grades and weights of lubricating oils, jet fuel, diesel fuel, kerosene of all the various grades, heating oil, and various chemicals that are used in the making of polymers and assorted plastics. The end products complete the oil refining process.