Poisonous floating islands of plastic and garbage are focus of newer waste to energy technology. Turning such an incredible negative impact on the environment into a potential source for alternative energy generation. 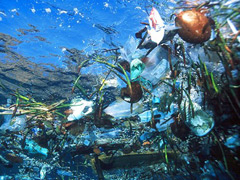 The great pacific garbage patch actually consists of two large areas – the eastern and the western patches. The eastern patch is between California and Hawaii and it is over twice the size of Texas alone. The western patch is located between Hawaii and Japan. These Pacific Ocean garbage patches collect currents that carry debris and waste from all over the globe. When the currents reach the great pacific garbage patch, they deposit the garbage they have accumulated. Because neither fishers nor tourists ever visit the area due to the lack of marine life, most people are not even aware of the existence of the pacific ocean garbage patches.

Some people have called it “the plastic island”, and according to them, it poses an enormous threat to the environment of the whole planet. However, others claim that it actually has great potential for alternative energy generation. There are waste to energy programs, which may turn the great pacific garbage patch into electricity and heat for homes and offices. Waste to energy power plants convert solid waste (even plastics) into energy. These waste to energy programs create a win-win situation in the case of the pacific ocean garbage patches. The trash would be taken out of the ocean, leaving the marine life and the birds unaffected by toxins, and energy can be generated by non-polluting methods.

These Pacific Ocean garbage patches have created an amazing opportunity for green energy. There are shortages of energy all over the world and fossil fuels are damaging the environment more and more, so something has to be done. Using the great pacific garbage patch for a plant under a waste to energy project could turn an environmental threat into an alternative energy source.

Waste to energy programs are a great way to turn pollution into energy. Such technology can prevent 40 million metric tons of emissions of greenhouse gas (in carbon dioxide equivalent form) from being released into the atmosphere every year. Waste to energy programs also prevent nearly 2.6 million tons of volatile organic compounds and 24,000 tons of nitrogen oxides from being released into the atmosphere.

The current way to get rid of garbage is land disposal, which causes the release of methane, which is a powerful greenhouse gas, as this garbage decomposes. Waste to energy facilities are a clean alternative to this and can also produce electricity. Their main benefit, of course, is decreasing reliance on power plants that result in carbon dioxide emissions when oil and coal are burned, which result in one of the worst kinds of greenhouse gas emissions into the atmosphere. Waste to energy plants do not release methane into the atmosphere, which would otherwise occur when the trash decomposes. They also avoid the release of CO2, which is usually released when generating electricity using fossil fuels.

For more information. go to: