What additional information do you need on the top environmentally visionary companies of the world?

The photovoltaic alternative energy systems installed on the Ferrari plant contains almost eleven hundred panels, and has the ability to generate more than two hundred kilowatt hours of electricity every year. This should have a substantial impact on both the outside energy needed by the plant, and on the amount of carbon, pollution, and environmental harm the manufacturing plant will have on the surrounding area and populations. Going green makes Ferrari once again stand out ahead of the pack, making them a leader in this industry. Responsible and energy conserving manufacturing practices can make a large impact on the earth, and greatly slow down global warming. Ferrari is showing that this is possible, and many other industries and sectors may follow this example and make changes to contribute to a better future, one that has plenty of energy and no fossil fuel use. 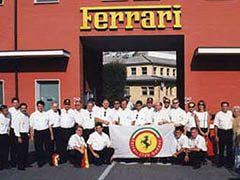 In a innovative and surprise move, the Ferrari company has revealed that they are installing and will be using alternative energy systems in the plant located in Maranello, Italy. This may change the entire image of the company, because when you think of Ferrari you think of fast sports cars with a lot of power under the hood, not solar energy and renewable energy concerns. The company is going green because of all the benefits these energy sources can provide, not just to the company but to the entire planet. The solar power photovoltaic system was installed by EnerRay, one of the alternative energy companies that are becoming more popular. The system can provide substantial amounts of energy to the Engine Mechanical Machining plant, which is one of the main Ferrari research and manufacturing plants in operation.

Many people may be surprised that one of the most well known automobile manufacturers is going green, but this move makes a lot of sense. The energy generated by the solar power alternative energy systems can help supply the energy needs of the plant, and greatly reduce the carbon emissions which are released into the atmosphere from the use of fossil fuels. Ferrari has always been a leader in technology and innovation, and this move is just one more step which shows the company is still headed for a bright and successful future in the automobile manufacturing sector. Hopefully other automakers will take notice and follow, making the earth a better place and ensuring that fossil fuel use is eliminated before an energy crisis can occur.

This is not the only green move using alternative energy systems that the company is planning. They have a program aimed at ongoing sustainability, and the goal is to meet most to all of the electricity requirements for the manufacturing plants, while reducing the level of carbon emissions by at least twenty to thirty percent from the current levels. These goals will be met by constructing a tri-generation plant that will make use of solar energy and other alternative energy sources. These are renewable energy sources that are friendly to the environment, and do not pollute or cause smog.

Ferrari is also looking at modifications and components to help reduce the carbon footprint left by the cars the company manufactures and sells. Do not expect to see solar powered cars from Ferrari anytime in the close future, but the company is researching and developing engine modifications to allow the use of biofuels instead of fossil fuels, and these vehicles may be seen in the near future from the automaker hopefully.