Both ethanol and biodiesel are better alternatives to fossil fuels and both reduce pollution and greenhouse gas emissions. Biodiesel does have advantages over ethanol because it burns cleaner and can be used alone without combining it with gasoline. With algae as a possible biomass source to produce biodiesel, it is possible that this fuel will be the primary fuel of the future for vehicles. Both of these biofuels are produced using organic materials, are friendlier to the Earth than gasoline and diesel fuel, and both can be produced on a large scale. Many vehicles burn gasoline; even a 10 percent ethanol blend would be better than pure gasoline that produces harmful emissions. Other vehicles burn diesel fuel. For these vehicles, biodiesel is the right answer to help reduce harmful carbon emissions. The biofuel you choose will depend on many factors, but the simple act of choosing is a step in the right direction. 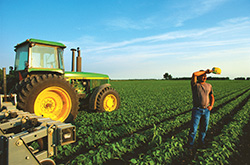 The debate on the demise of using fossil fuels is over. Fossil fuels lose. But that leaves us in a quandary regarding the best replacement choice. Biofuels are one of the major choices for next generation fuels in the world. The two choices of biofuels are ethanol and biodiesel, with scientists, environmentalists and the general public a bit confused as to which might be better.
Both ethanol and biodiesel are produced using biomass energy. Ethanol is made from corn and soybeans biodiesel is being produced in the United States. Other countries use different plants and organic materials like rapeseed or other plants to produce these fuels. Ethanol and biodiesel both have many benefits, and comparing all of the advantages and disadvantages of each will help determine which one might make a better choice.

Ethanol is an alcohol-based biofuel that is produced using a method similar to that used to make whiskeys and other liquors. This biofuel is made from corn and other biomass materials in the United States and is mixed with gasoline in two different combinations. One blend contains 10 percent ethanol and the other 85 percent. Ethanol increases the octane level of the gasoline so that the fuel burns cleaner. Some energy is used in the production of this biofuel and the calculations show that ethanol only gives 25 percent more energy than it takes to create it. Ethanol reduces harmful pollution and emissions by 12 to 15 percent over gasoline alone. There are some problems with ethanol, however, because this biofuel is mixed with gasoline and cannot be used by itself as a fuel. There are vehicles that can burn the blend containing 85 percent ethanol, called flexible fuel vehicles, but regular gasoline engines can only burn the 10 percent ethanol blend.

Biodiesel is another biofuel that is created from biomass materials, only this fuel is created from fats in plants and animals. Biodiesel offers many benefits and is significantly better than ethanol when it comes to the negative effects on the Earth, as well as comparing net energy gains from the end product. Biodiesel creates 93 percent more energy than what is required during the production process. In addition, biodiesel can be added to regular diesel or burned without any diesel fuel added. In the United States, soybeans are the main source of biomass for this biofuel, but in other countries plants like rapeseed are used instead. There is also a large potential for biodiesel that is derived from biomass algae. Biodiesel reduces harmful pollution by an average of 40 to 45 percent over regular diesel, making it much better than ethanol for the environment and concerns related to global warming.

One Response to “Ethanol or Biodiesel?”