Are there really any benefits to global warming? Additional info

Do the benefits of global warming outweigh the problems? Not really. New studies are showing that the art-of-denial for the global warming problem may indeed cause devastation for all life on earth. 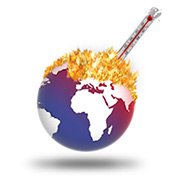 Over the past 20 years global warming has been a hot topic and it is becoming an increasingly controversial issue. The negative effects of global warming are all very real, and the need for renewable energy to replace fossil fuels is increasing exponentially. However, not all of the effects on the climate would be so terrible. In fact, there may actually be some benefits of global warming.

The term “global warming” to begin with is a bit misleading, because it implies that the entire globe is heating up. This is not so. Only some areas of the world are experiencing increasing temperatures, while others will not experience any changes for many years, perhaps even centuries. Moreover, areas that normally experience extremely cold temperatures could actually see some positive effects of global warming. The number of deaths caused by frigid temperatures would drop substantially, which would result in reduced health care costs. Higher temperatures in those areas would also mean that less energy would be necessary for heating homes.

Amongst the supposed other benefits of global warming are safer winters. Since there would be less ice and snow on the roads, it would lead to less winter related accidents during the colder months. Once again, this will save the health care system a lot of money.

Other possible positive effects of global warming include advantages for farming. With colder areas warming up, it will be possible to use that land for living and agriculture. Thus, more crops will be able to grow in colder areas and the seasons for growing them would become longer. So, one of the benefits of global warming is that it could help increase the global food supply by cultivating previously unused land.

Having said all that, by no means is global warming a good thing in general. We should not try to find excuses to not conserve energy. The opposite is actually true. Energy conservation and the use of renewable energy sources is what will stop the negative effects of global warming. Our world will keep on experiencing this phenomenon in the future, even after we decrease greenhouse gas emissions. Energy conservation and the replacement of fossil fuels are key steps to ensure that our planet continues to be livable for our children and grandchildren. Whilst there may be some benefits of global warming, as we have discussed, they will be nothing compared to the multitude of problems the world would experience if it keeps on heating up at the rate that it is.

The issue of global warming is a serious one, and as the Earth’s inhabitants it is our responsibility to eliminate its negative effects, so that we continue on living as we are. The use of alternative energy like solar, wind, and biomass energy, as well as various others will minimize the downside of global warming as much as possible. Conservation of energy also allows us to make the most of the energy that we now possess without needing more, until the complete elimination of fossil fuel use.

8 Responses to “Are there really any benefits to global warming? Additional info”