A review on gas turbines for biogas combustion

Are you looking for additional information on biogas and biofuel? 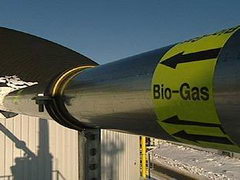 Gas turbines for biogas use have received significant attention lately, and there are a number of turbines that can be used with biogas to meet energy demand. Siemens, one of the leaders across the world when it comes to making turbines, has developed some which have been tested with biogas, and proven to be very effective. Anaerobic digestion can be used to produce this alternative fuel source, and there are also special landfills developed which capture the gases that are released when organic matter decomposes. All biomass releases these gases when they start to decompose, and if they are not captured and utilized these gases will be released into the environment instead, to harm the ozone and planet. Once it is captured or created, this gas is then fed into a gas fired combustion turbine where it is used to generate electricity. Right now many power plants use natural gas or other fossil fuels to produce much of the electricity that is needed to meet the demands. These energy sources are not ideal for many reasons, and replacing them with a biofuel that works just as well makes good sense in a number of ways.

Gas turbines for biogas can be just as effective and efficient. There is no loss of power or an increase in the energy needs of the process. Biomass power can be much more environmentally friendly than fossil fuels, and biogas can be scrubbed to remove any impurities so that it burns much cleaner. This fuel has far fewer greenhouse gas emissions, and many types of biomass actually help to clean the air and planet while growing, to make the process of turning biomass into biogas one that is as close as possible to carbon neutral. Another benefit of gas turbines for biogas is that this equipment generates heat when it is in operation. This heat is a waste product of the process, but it can be used to provide heat and steam as well, instead of being discarded. When compared to turbines which use traditional fossil fuels, gas turbines for biogas have the same power and effectiveness, with lower emissions and pollution. Biomass energy is available in large amounts, and there is no worries about demand out pacing supply any time soon. The amount of biomass which can be converted into biogas is enormous, with manure and both municipal and industrial waste already present in vast quantities.

Some large farms and agricultural facilities use gas turbines for biogas which is created right on the property. This method can eliminate the need to dispose of the manure and other biomass waste, because these materials are used to generate electricity and heat as well. New advances and developments have allowed biogas to become more competitive, and to play a role in energy generation which is greener and cleaner. Gas turbines can be operated using biogas instead of other less desirable power sources, to make the entire process more effective and less harmful. Generating the power that the world needs does not have to depend on fossil fuels, or other energy sources which rely on limited resources that can not be renewed or replaced. The key to an effective alternative energy program is understanding that many sources may need to be utilized together. This means that biomass will be used along with other sources, technologies and advancements, like solar, wind, ocean, and geothermal power, to provide the large amounts of energy that the world and population will need. Gas turbines for biogas can play an important role in preventing an energy crisis, and this power generation process offers many benefits and very few disadvantages.

One Response to “A review on gas turbines for biogas combustion”