7 Impacts of Global Warming You Have Never Heard About 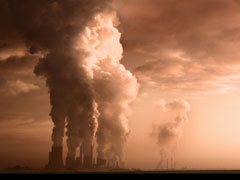 1) Aggravated Allergies. This is probably one of the most surprising global warming consequences. Research has demonstrated that because of the warmer temperatures and higher levels of carbon dioxide in the atmosphere, plants are beginning to blossom earlier, which causes the release of more pollen. This makes it harder on those who already suffer from asthma and/or seasonal allergies. Also, this makes the allergy season go on for longer than before.

2) Ruined Ruins. There is a variety of ancient settlements, temples, and other artifacts that have survived for virtually thousands of years. However, the climate change happening now may put an end to some of these. Because the climate is becoming more extreme in some areas, irreplaceable ancient sites may be damaged irreversibly. One example of such damage that has already happened is at Sukhthail, which is a site in Thailand that is 600 years old. Increased flooding caused by climate change in the region has done a lot of harm to this ruin.

3) Animals miss the food supply. One of the main impacts of global warming is that spring is starting sooner in many regions of the globe. This means that migrating animals that are unable to reset their internal clock will miss out on the food supply, and could eventually die out as a species.

4) Slowing satellites. Global warming consequences are even seen in space. Because vast amounts of carbon dioxide emissions rise into the atmosphere’s outermost level, the air molecules there create drag, which results in the slowing of satellites. This means that engineers are often forced to boost them back in place.

5) The Arctic blossoms. The melting ice caps in the Arctic may be causing serious problems for lower latitudes, but the Arctic biota itself is in a very sunny place. Plants have been seen growing in the spring, when the ice melts earlier than before, whilst plants in the Arctic previously remained under ice for the majority of the year.

6) Rebounding mountains. Because of the melting glaciers on top of certain mountain ranges like the Alps, these mountains are undergoing a gradual growth spurt. Of course, the average hiker wouldn’t notice this effect (!), but it is there.

7) Animals moving up. This is another very subtle impact of global warming. Small animals like mice, chipmunks, and squirrels, as well as larger ones like polar bears, have been seen moving to higher ground because of the changes their habitats have been subject to as a result of global warming.

For more information on global warming, go to: