The last step of the 5-step green plan involves using regulation and taxation to cap carbon dioxide emissions. This step involves putting into place a carbon cap, and making sure that carbon levels are kept in check. Once the cap is in place, other programs will be implemented to reduce the levels of these emissions by a specific amount; roughly 90 percent by the year 2050. Pollution, including carbon, will be taxed, which will discourage businesses from polluting the earth and the air because they would be charged according to their level of pollution. 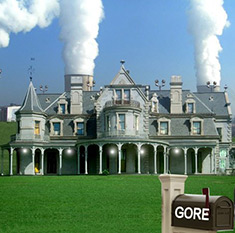 Al Gore recently released his 5-step plan for clean energy, and this plan has a lot going for it. The plan takes steps to end our energy dependence and to stop harmful pollution, while at the same time encouraging employment and economic growth. This plan could stop the use of fossil fuels and instead make a move to alternative renewable energy sources that are environmentally friendly and can be produced right here in the United States. The plan addresses both the economical crisis we face and the ecological crisis faced by the entire world.

The first step in the 5-step green plan would create alternative energy incentives so that wind farms are developed in the American Midwest, solar power plants are constructed in the American Southwest, and geothermal energy plants are built in areas that are considered hot spots for geothermal energy. This could allow us to end our dependence on fossil fuels and create needed energy right here in the U.S. with environmentally friendly methods. Step one of the 5-step green plan would stop harmful carbon emissions from the burning fossil fuels and would reduce greenhouse gases in the atmosphere that contribute to global warming.

The second step in the 5-step green plan outlined by Al Gore involves creating a smart power grid system. This concept would allow homeowners and businesses that create extra green power to sell this surplus energy to utility businesses at a fair price, one that is determined by regulators and not the utility company. This only makes sense because the company buying the power should not be the one deciding the price to charge for it. This is a clear conflict of interest. The aim of this step is to create a power grid that does not rely on central power plants for the needed energy, but instead receives energy from all over the grid. This step also involves an investment of $400 billion to help develop and create the grid.

Step three of the 5-step energy plan involves providing assistance to all automakers so that the conversion to a plug-in hybrid car can be made. The smart energy grid also figures into this step, because the plug-in hybrid vehicles can be charged during low demand hours.

The fourth step in this plan involves an effort across the nation to make all American buildings more environmentally friendly. This involves installing better insulation, more efficient lighting, better and more environmentally friendly heating and cooling systems, and other steps needed to lower the carbon emissions that these buildings produce.
Al Gore's 5-step green plan could be the answer to ending both the ecological and the economical crises that the world faces. Switching to renewable, eco-friendly energy sources will lower pollution, create jobs, and protect the environment. With global warming becoming a big threat, the time to stop our dependence on fossil fuels and foreign countries is now. This can be done by switching to alternative energy sources. The 5-step green plan outlines where the funds need to come from to make this plan work.