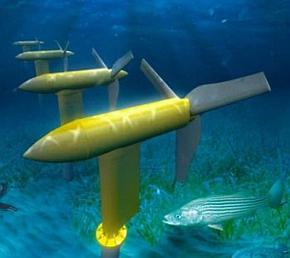 One solution to harnessing energy from underwater is through the use of underwater turbines. They look somewhat like wind turbines, but they are a lot stronger, because they have to withstand the pressure and power of very rough currents. Many areas exist that are perfect locations for such turbines, an example of which is the northeast U.S. coast, just off the state of Maine. The ocean currents are very strong, and they can easily turn the turbines that are underwater. This generates electricity and other energy forms.

Another renewable energy source available from the ocean is called ocean thermal energy. The ocean surface water is warmed up by the sun, which creates a massive difference in temperature between the deeper water and the surface water. It is precisely this temperature difference that provides thermal energy. This energy source is dependable and renewable because the ocean comprises over 70 percent of the earth’s surface. So, utilizing ocean thermal energy could be yet another step to a cleaner environment.

Another type of energy available form the ocean is called mechanical energy. This energy entails using waves and tides. Tides are found under the surface of the water and are the result of the gravitational pull of the moon. Turbines can be used to harness tidal energy, much like in the case of currents. The turbine must be carefully placed though, in order to get the most use out of them. They are most effective where the tidal ranges are the largest.

Ocean energy is a very attractive source of energy in many ways, simply because of the vastness of the planet’s oceans. The costs of implementing underwater energy projects are projected to decrease drastically, and the payback period on investments will also decrease proportionately. Our oceans hold one of the keys to a more sustainable world and clean environment, and it is very possible that one day we will be able to access and capture a lot of the energy the oceans have to offer. This would be a tremendous breakthrough in the world of alternative energy. Where we stand today, it takes a lot of capital to implement an underwater energy project, and it could take years before all of the materials and specialists are gathered in order to build the equipment necessary to build the machinery. It is important for this machinery to be strong enough to withstand rough weather and water conditions. So, because of the high costs, it is not yet common to produce underwater turbines. However, it is a very sound concept, and it is only a matter of time before it is properly implemented.