How We Can Use Energy from Waves, Tides and Currents?

Energy from currents is also a possibility that is very environmentally friendly. Energy from the currents in the ocean are captured using underwater turbines. These turbines consist of a generator and rotor blades which are manufactured to be extremely strong and efficient. When placed under the water in areas where marine currents flow, the rotor blades are turned by the force of the currents and the generator produces energy that an be used. This method of power generation does not cause any harm to the earth and can be used as a source for large amounts of power. 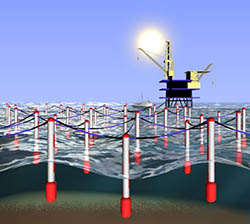 As we search for alternative energy sources we need only look to Mother Nature! The movement of water is a form of energy. How are we harnessing the waves, tides and currents? Is this the best form of renewable energy?

Tidal energy and energy from currents in the ocean offer great potential as some alternative energy sources to replace oil and other fossil fuels as our main energy source. Right now the technology needed to use the ocean as an enormous energy source is not completely researched. There are experiments in place that show the potential the ocean ashows, but more research and development needs to be done before this energy source will be viable and widely available. Ocean energy can include tidal energy, wave energy, ocean thermal energy conversion, and marine current energy.

Tidal energy is produced by the ocean's tides. This energy production can only be accomplished in areas where the tide is strong and can be controlled, and there may be less than one hundred areas in the entire world where tidal energy power stations can be located where they will be efficient and provide an abundance of power from tidal energy. One of the improvements needed in technology is the advancement of equipment, because strong equipment is needed to stand up to the underwater conditions it will be used in. Tidal energy uses diverted tides to turn underwater turbines, which generate power from the flow of the tides. The tidal flow can create significant quantities of energy, and this means less demand for oil and other fossil fuels. Tidal energy does not contribute to pollution or global warming, so this option for renewable energy means that it is friendly to the environment and a better solution than oil and natural gas. Tidal energy is also renewable so that there are not limited resources.

Energy from waves is another renewable energy source that is better for the environment than fossil fuels. Wave energy uses devices that may float or may be anchored into a stationary position. When these devices are moved by the ocean waves, this movement generates power that is captured. Energy from waves may be one source for clean renewable energy in the future. Experiments are being done to determine the potential for this type of energy, and so far the results have been very promising. Energy from waves do not emit any carbon or harmful greenhouse gases, so that it is much better for the planet and every living thing on it.
Energy from the ocean has enormous potential and can be a replacement for fossil fuels. This will eliminate greenhouse gases and stop mankind's contribution to global warming. Oil, natural gases, and other fossil fuels pollute the air and contribute in large amounts to global warming, and in addition they are resources which are finite and will run out sometime in the next century, possibly sooner if the demand for energy increases. Once these energy sources are gone an energy crisis may occur, if there are not already renewable alternative energy sources in place to take over the energy supply, and prevent disruptions and shortages. Energy from waves, energy from currents, and tidal energy all offer alternative energy sources that can help the planet and the people on it at the same time.