Second level research on tidal turbines and overall return on investment of tidal power as a renewable energy source. 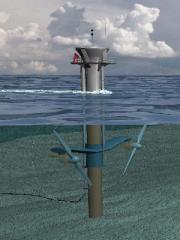 Here are some of the main pros associated with this form of renewable energy:

Tidal energy facts 1 – Consistency and reliability: Many other sources of renewable energy, such as solar and wind, generate a fluctuating amount of power which is dependant on weather conditions. This is not the case with tidal power, which can generate energy like clockwork indefinitely. This is a big benefit of this form of renewable energy and means that there will never be any shortage in supply.

Tidal energy facts 2 – Efficiency: Tidal turbines are considered a very efficient way to generate energy. Tidal dams convert up to 80% of the tidal energy in to actual electricity. Solar and wind generators work on a much lower efficiency level.

Tidal energy facts 3 – No harmful emissions whatsoever: With the world moving fast to a low-carbon economy, tidal power projects are in desperate need. CO2 emissions are zero, as are the emissions of other harmful gases, such as Sulfur Dioxide (which cause acid rain.)

As much as we would like tidal power to have no disadvantages, unfortunately this is not the case. Here are the main cons:

Tidal energy facts 4 – Limited locations: There are a limited number of locations where it is economically feasible to install tidal energy generators. For it to be worthwhile, the tidal flow and the volume of ebbing water must be large. Some countries have no coastline, and naturally this form of renewable energy is irrelevant for them. Plenty of other countries do have a coastline, but the tidal movement is too small for tidal every to be considered. Also, tidal turbines can of-course only produce energy two or four times a day.

Tidal energy facts 5 – Up-front and maintenance costs: Power is generated through a system of barrages. This equipment is not only very expensive to install in the first place, but it requires a considerable amount of maintenance. The large costs associated with setting up and looking after such as system is a big disadvantage for this type of renewable energy. Saying that, any energy system is expensive to set up and run, and if a tidal barrage is located in a good place, the large amount of energy that it can produce makes it worth it.

Tidal energy facts 6 – Environmental issues: Tidal barrages can cause problems to the sea creatures that have a habitat in the vicinity. Fish migrations can be heavily disrupted too. A large number of fish can be killed as they pass through the turbines. For this reason extensive environmental audits are conducted before permission is given for a tidal barrage to be constructed.

For the original article, click here
For more information, go to:
en.wikipedia.org,
energysavers.gov