Continued research and actual implementation of syngas installations are proving to be an incredible benefit. Eliminating waste in an environmentally clean method while producing energy is a dual ‘win’. Where is syngas being used and how much energy does it produce? 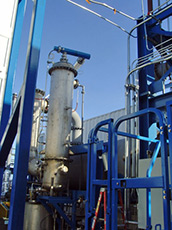 What does syngas mean?

Syngas is the name for a synthetic gas, which is produced via the gasification of biomass. The word biomass refers to a wide range of solids that can be burnt to produce energy, such as waste feedstock and garbage. Syngas is typically made up of hydrogen, carbon monoxide as well as carbon dioxide and methane in small amounts.

Gasification changes any carbon based matter into a synthetic gas, which is then used to generate power. Waste feedstock is a common material used for gasification. They are placed into the gasifier, which is an oxygen-starved environment, and the feedstock then syngas is produced. An enormous amount of heat required is required to produced syngas – up to 2500 degrees Celsius. Typically, the heating is produced by a process called direct heating, in which a small quantity of oxygen is added to the reactor.

What is the benefit of syngas?

Syngas is a gas which is much cleaner than those produced through burning fossil fuels such as coal and gas. In an age when emissions reduction is an important policy of many governments, and when many countries are legally obliged to reduce their carbon dioxide emissions, syngas technology has enormous potential. Syngas can be manufactured domestically, reducing dependence on foreign countries for fossil fuels.
In addition, this would generate jobs and growth in local economies. A further advantage of this technology is that syngas can be generated as part of the waste to energy process, which means that waste that would otherwise end up in the landfill gets dealt with cleanly and efficiently.

Are Syngas being practically applied today?

Absolutely. A great example can be found in New Bedford, Massachusetts, where the renewable energy company Ze-gen has run a demonstration facility for more than two years. The company injects biomass, which in this case is organic waste from municipal sources, and burns it to produce syngas. These syngas are much cleaner than gas produced from the gasification of coal, and they release much les carbon dioxide. The toxins that are produced either sink to the bottom of the chamber or are caught at the top in silica crust.

This test facility burns 1 ton of waste per hour, and in the US, where landfills are overflowing, the company has attracted considerable attention from investors. Last year, it was announced that they are planning to open a commercial and industrial facility in 2012. The future looks bright for syngas technology!