How to Reduce Pollution from Fossil Fuels?

Another measure that could be taken and is being taken, at least to some extent, is increased environmental regulations. Of course different countries have their norms and regulations that are aimed at minimizing pollution, but as we understand, it is not easy to reduce pollution significantly even when these regulations are adopted and in effect. We can take as an example old coal plants in the United States. These old plants are allowed to operate under the least protective standards. New technologies and common efforts could change the situation; however, very often people only start really pursuing something when it reaches the verge of real danger. We can only hope that it won't be too late when serious changes are implemented that will decrease pollution so that our descendants won't blame us for any downtime. 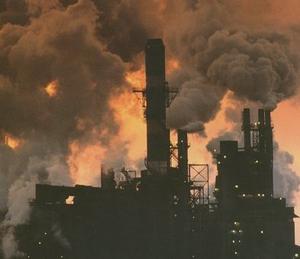 In around one hundred years, mankind’s dependency on fossil fuels has brought a never before seen self-inflicted level of pollution which cascades even into levels of disease and medical problems to our own kind. Where did this start and how do we stop it?

Fossil fuels represent a major source that provides the world with energy. These fuels are non-renewable; in other words, the rate at which these fuels are being used is faster than the rate at which they are being formed. The most popular theory about the origin of fossil fuels is that they were formed many millions of years ago, basically the fossilized remains of ancient plants and animals. These remains were mixed with mud and lie under the surface of the Earth. After that, the influence of pressure and heat as well as some other factors transformed these substances into fossil fuels. This is a very simple explanation, though, of course, the process was more complicated practically. There is also another conception regarding the fossil fuels formation, but it is not as broadly supported as the first mentioned.

Fossil fuels are combustible, which means they can produce energy. What do we include as fossil fuels? These are coal, natural gas and crude oil. They are getting more expensive every year, but not just that. They also produce harmful by-products and pollution, each to its own extent.

It is considered that about 90 percent of the current greenhouse gases on Earth are contributed by the burning of fossil fuels. If the global average temperature increased by only 1 degree Celsius, it would lead to very serious and negative effects, which might include tornadoes, a sea level increase, melting of the polar ice caps, floods and the spread of infectious disease(s). Volatile organic compounds, sulfur dioxide, heavy metals and other pollutants are all released as by-products from the burning of fossil fuels. Automobiles release more pollutants than any other pollution source. They cause respiratory disease and even death in some cases. This is a serious threat to our planet.

Another problem caused by air pollution is smog and acid rain. Acid rain, produced by pollutants like sulfur and nitrogen, mixed with water, are caused by human activity, mainly. Acid rain affects forests, soil and aquatic life as well as buildings and monuments.

What can be done in order to diminish the pollution produced by the burning of fossil fuels? What can we do? As individuals, we are but peanuts. This is truth because we can only do something in our private space to try and affect change, but in order to get a significant result, the government and energy production industries should take action.

First of all, dependence on fossil fuels should be reduced by increasing the use of alternative energy sources such as solar energy, wind energy and others. These alternative sources have been used already in many countries for several years. New technologies are also being developed currently. Of course this would require time and investments.