Past, Present and Future of Coal Mining Industry

Are you interested in additional information on the coal and mining industries?

Traditional mining: how it is drilling away the earths resources
History of coal mining industry- the power of our country

Coal will probably not be replaced as a fuel source any time soon, but the coal mining industry can make the entire process less harmful to the environment and more cost effective. Methane recovery systems help coal mining businesses recover more products, which can then be used as energy needed for the coal mining process. Methane gases are a dangerous factor of coal mining, and in the past the industry and the miners themselves suffered great losses because of this gas. Some coal mines began putting in vents to allow methane gas to escape from the mines so that it did not build up and pose a risk. Yellow canaries were taken into mines to determine if the level of gas in the mine was dangerous or not. If the bird died, the miners knew to get out immediately. 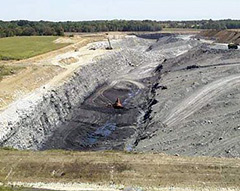 The coal mining industry has come a long way in 200 years, since the coal mining industry really took off. During the Industrial Revolution, energy demand grew substantially, and coal was in needed in large amounts. At first, all mining was very dangerous work. It involved underground mines where men worked long hours removing coal by hand from deep within the earth. Mining accidents were frequent, and many men died getting trapped underground because of walls caving in or a buildup of gas in the mines. Coal was needed for heat, or to produce energy in the form of steam, which was then used to power various machines, trains, boats, etc.

Coal mining today is much different. There is still significant underground mining, but some of the mining performed in the United States today is surface mining, which does not involve digging deep mines into the earth. Surface mining involves removing coal from under the surface layer of earth. This can be done if the coal is no more than 200 feet beneath the surface. If the coal is buried any deeper, however, underground mining must be performed to recover the coal.

Many environmentalists are against surface mining because of the large scale damage this method can cause. The entire surface that covers the layer of coal is removed, and then the coal is recovered. Once all of the coal is removed, surface materials such as rocks, dirt, and sediment are returned to the area and spread out. The hope is that the area will recover and can be replanted with trees and other plant life. Methane recovery systems and research concerning the dangers of methane gas have greatly reduced the number of accidents that occur in underground mines, making both mining methods safer.

Some coal mines are looking forward to the future, with methane recovery systems that collect the present methane gases so no explosion can occur and health risks are limited. Methane recovery systems make sense because they make the mining process safer and provide for methane gas, another product, to be collected and then used. The methane gas recovered can be sold to utility companies and other buyers, and can be used in the coal mining process such as for drying coal or providing heat to buildings and energy to equipment through steam. Recovering methane gas from coal mining is the responsible thing to do, and the entire industry is starting to move towards making the coal mining process more environmentally friendly. Methane gas recovery means capturing the methane gas before it is released into the atmosphere, or builds up in the underground mines. When methane gas is released into the atmosphere, it contributes to global warming and air pollution. Capturing, recovering, and using this gas is both ecologically friendly and makes good financial sense.

Modern mines should use methane gas recovery systems to capture this gas so that it can be used. The future of the mining industry depends on its ability to become as cost effective and eco-friendly as possible, and methane recovery systems are a step in the right direction.

2 Responses to “Past, Present and Future of Coal Mining Industry”