North Pole Global Warming – The Truth and the Realities

For centuries there has been a thick sheet of ice covering much of the Arctic, but recently it has been discovered to shrink at an increasing rate. As this past winter began, larger areas than ever recorded before remained free of ice, according to climate scientists. This is a very important sign of the rate at which North Pole global warming is taking place, and it has widespread effects. The first of these effects is on fisheries, which are forced to move from one coast to another to keep up with the shifting marine life. For example, plankton and algae increase in certain areas, but disappear in others. 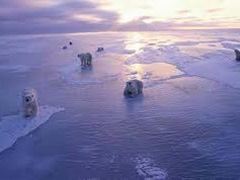 According to global warming research in the North Pole, the arctic wildlife is suffering too. Since the ice is melting, animals living in the region become endangered. This is also a threat for polar bears. The reason for this is that these animals need the thick ice sheet for their survival, as they often use it for traveling across and hunting for food. If there is less ice to walk on, quite simply, polar bears will have trouble finding food.


The thick perennial ice of the North Pole is generally strong enough to survive even the warm months in summer, but satellite images taken recently show that about 10 percent of this thick ice is already cracked because of summer storms, leading up to North Pole global warming. This region is quite large and covers an area that is larger than the British Isles. According to global warming research done by scientists, human beings are mostly responsible for this Arctic ice meltdown by burning so much oil, gas, and coal. To learn more about fossil fuels, click here.

However, it isn’t just individuals contributing to the North Pole global warming. Factories, for one, are a big one. Fuel that is not completely burned emits vast amounts of soot, which, in turn, speeds up the meltdown of the Arctic ice in a major way. Other Arctic ice meltdown perpetrators are dark carbon (To read more about carbon emmisions, click here), ozone, and methane (To learn about methane and global warming, click here). Researches say that these gases accelerate the melting of the thick ice sheets a lot more than sunlight or general global heating. There are some studies, however, which state that the North Pole global warming is also a result of a certain natural phenomena, and not just soot and poisonous gases.

Whatever the causes, this phenomenon is happening, and it is happening fast. Just not long ago scientists were predicting that the Arctic would be completely ice free by the end of this century, given the current melting rate. Now this prediction has moved up to the year 2040, if the present warming rate continues to be unchecked.