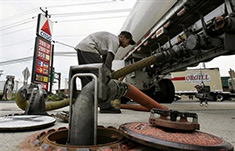 Dependence on oil is a serious problem in America, and high gas prices are only one component. Gas prices during the summer hit an all time high, at or close to four dollars a gallon. Even though the price of gas has gone down significantly, the dependence on oil still remains. When gas prices were high, many Americans cut back, leading to gas usage dropping significantly. Now that prices are lower, more Americans are going back to driving more, which means more global warming and air pollution, as well as more dependence on fossil fuels. Dependence on oil is not a good thing. In America, around thirteen million dollars each hour is spent on gasoline and oil. Much of this oil comes from the Persian Gulf and Middle East countries, which means that our dependence on oil is a threat to the security and economy of our country.

A dependence on oil means having to make deals with foreign countries like Iran and Venezuela, because we need the oil for our energy, and this threatens the security of America. Using foreign oil is dangerous, and using an energy source that is controlled by a handful of countries, many of them hostile to American and world interests, may end up causing a global energy crisis that will have a profound effect on the global economy. OPEC and oil companies spend millions of dollars lobbying the American government, and the result is that we are even more dependent on oil than before. Instead, we need to concentrate on domestically produced alternative renewable energy that is created in this country, not imported from somewhere else.

Foreign oil and a dependence on oil from outside the USA poses enormous security risks as well. Unfortunately, many of the countries that control the biggest percentage of oil reserves in the world are also the same countries where terrorists and other security risks are located. Overseas governments can be risky and unstable, and this means that we take the risk of an OPEC country or hostile foreign government cutting off the oil supply that is available to us. This would cause an energy crisis that could have an enormous effect on the American economy and population. We have already seen gas prices around four dollars a gallon, but if oil was suddenly in short supply this amount could go up substantially. Our dependence on oil puts us at enormous safety and security risks, and puts us at the mercy of oil producing countries that we export oil from. Even if we could drill every oil reserve under US land, we would not be able to supply enough fossil fuels to keep the country out of an energy crisis. In addition, locating new oil can take years, and then it takes years to set up the drilling and start producing oil that can be refined and used.