Lessons we should learn from Hurricane Katrina devastation

Harvesting the energy from hurricanes has another benefit as well. Energy that is taken from these storms will lessen their impact because they will lose the power they need to be destructive and devastate areas where they land and travel. Hurricanes continue building as long as they move over warm water, but if we can siphon off some of their energy, these storms may not become as big and threatening. 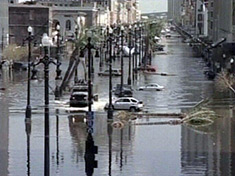 Hurricane Katrina should always be remembered, and for many different reasons. This hurricane was one of the worst ever to hit American shores, and the results were devastating and deadly. Many people died and many more were left homeless without anything but the clothes on their backs. It took months to clean and rebuild the areas hit hardest by the storm. In some areas the damage has still not been completely repaired, and may not be for some time. The federal government was not prepared to deal with such a crisis and storm of this magnitude. This was most apparent right after Hurricane Katrina hit. People went days without food or water, emergency shelters were overcrowded and under supplied, and chaos reigned. This hurricane taught every American an important lesson: never underestimate the fury of nature.

Hurricane Katrina should be remembered for another reason as well. The force of this storm showed us the amount of raw energy that is possible during a hurricane. This could mean an enormous potential if this energy could be tapped into and used as an alternative energy source. With fossil fuels like oil and natural gas slowly diminishing, we will eventually have to find alternative sources of energy to meet our needs. Hurricanes may just be the answer. Hurricane Katrina was a category five hurricane, the strongest imaginable, and all the energy used to destroy homes, cities, and entire areas of many states could have been harnessed and used to power and heat homes if we had the technology and capability.

Hurricanes have extremely high winds. In the case of Hurricane Katrina, the winds were measured at more than 155 miles per hour. These storms create significant wave energy as well. Some scientists estimate that harnessing the energy from a single category one or two hurricane could supply enough energy to meet our needs in the United States for three to four months, at least. Imagine what harnessing the energy from just one storm like Hurricane Katrina could provide. This means that developing the technology and equipment to harness energy from hurricanes could completely end our dependence on fossil fuels.
Hurricane Katrina was responsible for almost 2,000 deaths and billions of dollars in damages. It also contributed to hundreds of thousands of animal deaths, millions of people losing their homes and all their possessions, and massive repairs and cleanup efforts. It is doubtful that Hurricane Katrina will be forgotten any time soon, and this storm has provided a valuable lesson. Hurricanes can be destructive and powerful, but they also offer the potential for a renewable, sustainable, alternative energy source, of course with some research and development concerning technology. Harnessing the energy from a storm like Hurricane Katrina may seem impossible, but it can be done using the right equipment, technology, and concepts. We simply have to figure out how to do it safely and efficiently.

4 Responses to “Lessons we should learn from Hurricane Katrina devastation”