Hybrid Electric Cars: from Past to Future

Electric cars have come a long way since they were first invented in the early eighteen hundreds, and they may end up going even further in the future. Developing new technologies and methods for the storage of electricity may eventually lead to electric cars which far surpass what internal combustion engine cars today are capable off, without any of the negative effects of fossil fuel usage. Electricity is completely safe and environmentally friendly to use, and may be the answer to the energy and global warming crisis that is affecting the entire world today. 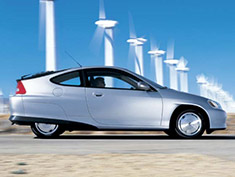 Electric cars have been around for a long time, and the first electric car was created in the early eighteen hundreds, before gasoline cars became popular. The first electric cars to hit the market were actually advertised to the wealthy, and the electric car was considered a vehicle that was perfect for ladies of the time to use to get around town in. These cars did not have any of the noise or pollution associated with combustion engines, and they also did not require a crank to be turned in order for the car to start. Once the internal combustion engine gained popularity, electric cars became scarce for a time. Currently, electric cars are making a comeback and are starting to be in high demand again because of air pollution, global warming, and the need to end the dependence on oil and other fossil fuels.

Electric cars and hybrid electric cars may very well be the car of the future. Advances in technology, and research using supercapacitators instead of batteries, will lead to more efficient ways to store electricity and ways to improve the distance an electric car can travel before it needs to be recharged. Electric cars of the future may well end up replacing the internal combustion engines of the present. With the global warming crisis and problems with air pollution and harmful greenhouse gas emissions, using fossil fuels may not be an option for many more years. Instead other energy options will be needed for vehicles to run. Electric cars have been around for over a hundred years in the past, and they may also be the perfect car for the future as well.
Electric cars have come from small vehicles which were very slow and only good for puttering around town to modern electric cars and hybrid electric cars which can go extremely fast and go much farther than before. The electric car of the future may make even bigger steps forward, and will prevent global warming and emissions that are full of carbon, sulfur, and other contaminants.

3 Responses to “Hybrid Electric Cars: from Past to Future”