An open cycle OTEC system places top level seawater which is warm in a low pressure container, causing the seawater to boil. This creates steam which expands, and this steam expansion is used to drive a low pressure turbine which is hooked to a generator to produce electricity. During this process, the salt from the steam is removed and deposited in the low pressure container. The steam is then turned from condensation to a liquid again by exposing it to cool temperatures provided by the low level seawater which is cold. The result of this process is more than just energy generation. Once seawater has been through the open cycle OTEC process, the liquid that remains is fresh water that is very close to being pure. 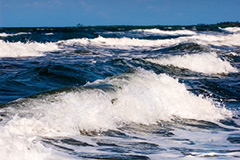 Ocean thermal energy conversion is a very promising field concerning alternative renewable energy sources. This process is also called OTEC for short. How does ocean thermal energy conversion work? More than seventy percent of the world is covered with oceans, and these oceans are flat surfaces that are similar to solar energy panels. Every day the oceans around the world absorb solar energy that is equivalent to more than two hundred million barrels of oil, and this shows the enormous potential of ocean thermal energy conversion. This is enough energy to supply the entire world, without ever using a drop of oil and other fossil fuels, for days or even months. OTEC technology was first used in the year 1886 by a French scientist, but the idea never became popular at that time.

OTEC is the process used to convert solar radiation and heat into electricity. This process uses the different layers of water and their various temperatures to create power. The water temperature differences between the warm and cold layers must be at least twenty degrees different. As the ocean goes away from land, it creates a slope leading to deep water that is warm on top and cold down deep. This is the perfect place for the ocean thermal energy conversion process. The different temperatures between the two layers of the ocean are very common in tropical climates, and these areas make the perfect locations for OTEC plants to be effective and efficient. Ocean thermal energy conversion can be done using several different systems. Three of the most common methods for the OTEC process are a closed cycle system, a hybrid cycle system, and an open cycle system.

A closed cycle OTEC system uses a fluid that has a low boiling point. This fluid is utilized to turn a turbine which generates electrical power. Seawater from the surface layer that is warmed by the sun is sent through a heat exchanger, and this causes the fluid used to power the turbine to become vaporized. This vapor expands and turns the turbines and generates electrical power. Cold seawater from the deeper layer is then sent through another heat exchanger, and this causes the vapor to become liquid again. After this point, the fluid is sent back into the system to be used again.
A hybrid OTEC process uses both types of technology for a unique mix. Some components of each type of OTEC system, both closed cycle and open cycle systems, are present in a hybrid system. Ocean thermal energy conversion is extremely environmentally friendly and safe, with no dangerous pollution risks. This process may be the answer to both the energy and environmental crisis. There is very little waste in this energy source, and recycling means that the end liquid is either used by the system again or is a water source for mankind, producing clean fresh water safe for consumption.