In the process of research into biomass fuels, we are finding a mixed bag of tricks. What are the benefits of corn ethanol and biodiesel made from soybeans? Does biomass fuels replace our dependency on fossil fuels or cause other problems? 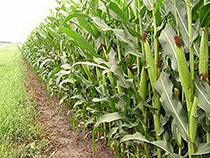 Biomass energy is used to create biofuels. Biomass energy comes from materials that originate from organic animal waste or plants. Soybeans and corn play an important role in biofuel production in the U.S., but other countries use different sources such as switchgrass, willow, and alfalfa. Corn is the main crop used in the U.S. to produce ethanol, which is one type of biofuel. Soybeans are the other main crop used, and from them biodiesel can be created.

There are farmers in the U.S. that supply corn to factories that process ethanol. The process that makes ethanol out of corn is similar to that of making alcohol such as whiskey. The first step entails crushing the corn and adding water to it as it is crushed. This creates a mush. The mixture is then heated, and as this happens, certain enzymes are added and they help make sugar out of the starch contained in the corn. Then yeast is added, and the sugar in the corn mush is fermented. This process of fermentation is what makes the ethanol, which is a type of alcohol.

Biodiesel is the other main biofuel in the U.S., which is made using soybeans. The process of turning soybeans into biodiesel is called transesterification. This is a process where fat or vegetable oil is separated from the glycerin in the soybeans. So, in the end there are two final products – glycerin and biodiesel, with the latter being used as a renewable energy source. Biodiesel is biofuel that has a much cleaner burning capacity than gasoline, and it is possible to use it on its own or combine it with regular diesel fuel. There are many benefits to using biodiesel. Firstly, it is renewable, which is very important in our world today. It creates much less harmful emissions, and it can be domestically produced, which reduces the U.S. reliance on foreign resources.

Both corn ethanol and soybeans biodiesel could be very advantageous for the environment. They both significantly reduce greenhouse gas emissions, simply because both of these biofuels are created from crops that absorb CO2. Therefore, using these biofuels ensures that the CO2 balance in the atmosphere is maintained and sustained. A major advantage of biodiesel is that it can be used in any engine that is diesel generated. However, this is not exactly the case when using 100 percent ethanol, and it is always recommended to use it in combination with gasoline or another fossil fuel. Thus, ethanol may only be compatible with certain vehicles that are gasoline powered. However, this is of no concern, since almost all the U.S. produced ethanol can be mixed with gasoline.

In conclusion, biomass fuels are a great step to a cleaner environment and more efficient use of resources. They can also help reduce global warming, which is becoming a more pressing issue every day. Of course, ending dependence on foreign fuels is a very important advantage as well.