Benefits of Bio Fuel Production to the World

Biofuels have been used in the past; however, their use was reduced when fossil fuels were discovered. The main reason behind this is that the cost of fossil fuels has been less than that of biofuels; at least that has been true up until recently. Ecological factors were also not considered or known when the production of fossil fuels became widespread. 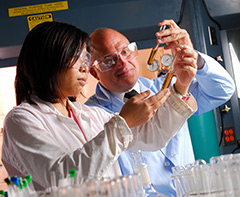 It is a well-known fact that many current energy reserves are limited on Earth. New technologies are being developed that would produce energy using materials other than non-renewable energy sources such as coal, natural gas and oil. These non-renewable sources of energy, also known as fossil fuels, were formed many millions years ago, and as a result, reserves are limited. We might not be feeling the deficiency of the energy right now because these sources are still available, but future generations are going to experience a shortage of these energy resources. This problem is exacerbated because the population of the world is growing exponentially; therefore, an ever-increasing demand for energy exists, which results in an ever-increasing depletion of these sources.

Scientists have already developed many new technologies that utilize renewable energy resources for energy production. Most of these technologies employ the use of solar energy, wind energy, biofuels and tidal power to produce electricity. Most of these techniques allow producing electricity from renewable sources. The electricity produced via these methods can be used in many manufacturing processes; however, it cannot be used to effectively supplement transportation energy needs -a huge source of fossil fuel depletion - as 99.9 percent of all vehicles on the planet burn gasoline or diesel fuel instead of electricity. Biofuel is one of the few renewable energy sources that can be used in modern cars without major changes needing to be made to vehicles that burn them as an alternative.

Biofuel is becoming more and more popular in Europe, Asia and the United States every year. Biofuel does not increase the amount of CO2 in the atmosphere because it is carbon neutral; therefore, it does not promote global warming. Biofuel is an alternative energy technology that can help diminish dependence on traditional energy materials such as fossil fuels.
Biomass is becoming more valuable as demand for it increases. Different biofuel programs are running in different countries. For example, China is currently developing bioethanol and biodiesel programs, while India is growing jatropha (an oil-producing tree) and plantations there are being extended. India has also set a goal to substitute 5 percent of its total transportation fuel demand with biaethanol. China is planning to cover 15 percent of its transport fuel demand with bioethanol by 2010.

The development of biofuel is also quite favorable for developing countries as it will stimulate rural development and provide jobs to many. I will also decrease a country's dependence on imported oil and other fuel products.

2 Responses to “Benefits of Bio Fuel Production to the World”