Gas is lighter than air and is extremely flammable and usually it doesn't have any odor. Gas tends to mix easily with chemicals that have a noticeable smell, something similar to the odor of rotten eggs. If you notice a rotten egg smell, it may be a signal that there is a gas leak in or around your house. In this case, you should take immediate action to check it out and possibly prevent a gas explosion. 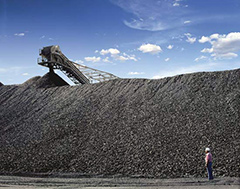 Fossil fuels come from organic remains that have been exposed to extreme pressure and heat over the course of millions and millions of years. Fossil fuels are non-renewable energy sources, which means that we have a limited supply of them on Earth and we may soon run out. There are three main types of fossil fuels: coal, natural gas and oil.

Coal is a black or brownish-black combustible rock. Unlike oil, it is ready for use immediately after it is excavated from the mine and does not require any refining. Coal is mainly made of carbon and hydrogen. Coal is a primary energy source for electricity in the world and it encompasses around 50 percent of the total electricity demand. About 1.87 billion tons of coal is burned in the world every year for electricity production. When the coal is burned in power plants it generates heat. The heat evaporates from water, creating steam. Expanding steam increases pressure in the boiler and moves the turbine that is connected to the generator, which produces electricity. This way the heat energy of the coal is converted to electrical energy.

The burning of coal also produces a number of other byproducts when it is burned that have a negative health-related impact. For example, microscopic particles are released from coal that can infiltrate the lungs. These particles carry toxic materials, irritating the lung tissue. If a person is inhaling these particles over a long period of time it may lead to the development of asthma. Asthma is especially widespread among coal miners and people that live in coal-mining areas.

Natural gas consists mostly of methane, with some propane, butane, ethane and pentane. Other ingredients such as carbon dioxide, nitrogen, helium and hydrogen sulfide are mostly removed before it is distributed as a product to consumers. Natural gas is measured in cubic meters. The ancient Persians would have "eternal fires," which were ignited by the very first discovered gas seeps.
Oil is also formed from the decomposed remains of ancient plants and animals. It is a liquid mixture of varying hydrocarbons. Usually, oil is refined before it is used. Raw or "crude" oil cannot be used in its natural form. It must be broken down into fractions and stored separately. Oil is used in many spheres as it has hydrocarbons of varying molecular masses. The very first oil refineries were installed by Ignacy ?ukasiewicz (Poland) in 1854. At first they had very few clients, as the demand for refined oil wasn't high at the time. Later, they gained popularity because of the invention of the kerosene lamp. Common products made from oil are petroleum, diesel, naphtha, fuel oils, asphalt, tar and many others.