The environment is now a national priority thanks to President Obama. This is probably one of the key changes instituted by the President, because green conversion is so important in our world today. Also, Dr. Chu has been appointed as Energy Secretary, so there is a lot of emphasis on R&D of renewable energy. The creation of many new jobs is another side benefit of this action. 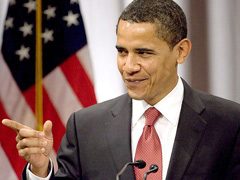 No matter what your political persuasion, it seems it is often easier to look at life as a glass-half-empty than half full. This is often the case when discussing an American President. Although President Obama has many opponents ready to criticize him at the first chance they get, he has done some wonderful things for this country, which previous presidents simply failed to even consider. Here is a list of prominent changes made by President Obama that have benefited the economy since he came into office:

1- The demise of Bin Laden and international removal of Gadhafi
While the former administration chased around other countries in search of WMD and in locations where we would never locate Bin Laden, President Obama placed a high priority of finding the man that master minded the September 11th tragedy.  He has continued this single task focused effort on the various high level members of Bin Laden’s organization with great success. Working together with international organizations, President Obama encouraged participation in the ultimate removal of Gadhafi from his tyrannical throne in Libya.

2 - Fewer recession woes
President Obama played a key role in slowing the recession down. People are no longer consumed with thoughts about recession and the economy seems to be gradually going into recovery. President Obama came up with a measured recovery plan, which contributed largely to the labor force transition with stimulus dollars. So, Obama’s U.S. economy plan worked quite well.

3 – The car industry is alive!
Click here to continue reading

Posted on May 11th under Global Ecology.
Permalink | Comments (0) | Technorati — View blog reactions | Save to del.icio.us