What was the deadliest earthquake in history?

Earthquakes are part of the natural process of the Earth. The tectonic plates of the surface of the world are always on the move. It takes thousands of years for them to make a journey, and when they crash into each other, it is always a slow and methodical process. We experience earthquakes in a majority of the world, even in places that you would least expect it. When asking the question what was the deadliest earthquake in history, the answer does not come easily.

Earthquakes can be devastating. But they also cause other natural disasters like tsunamis and landslides that are even more harmful. So what do we use as the criteria for calling an earthquake the deadliest in history? We must rely on information and data that is taken and recorded during the time. However, can the data be trusted? 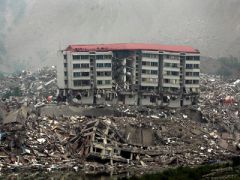 An example is the 1906 San Francisco earthquake. Even though the city was destroyed, the authorities reported few lives lost. It wasn't until many years later that it was discovered that they lied. Their ulterior motives were influenced on the fact that they wanted to encourage investors to San Francisco. A high death rate would discourage anyone from moving to or investing in their area.

Another question that we must ask is: what constitutes the deadliest? Is it loss of life, property damage or both?

When viewing a chart of some of the most devastating earthquakes in the last two hundred and fifty years, there is one area of the world that seems to have had the worst earthquakes. Of the twenty four top earthquakes, China has experience seven. That's over one quarter of the world's most horrific earthquakes killing over 1,542,590 people. Northeast China is one of the locations on the globe with the unique situation of having three different tectonic plates pushing against each other. Some of the beautiful mountain ranges, like the Himalayas are simply due to tectonic activity. The plates push ever upwards, creating the mountains.

To answer the question what was the deadliest earthquake in history, the answer is: the 1556 earthquake in Shaanxi, China and was guessed to be an approximate 8.0 magnitude. Over 830,000 people were reported dead or missing. The earthquake caused all manner of additional problems, including open land fissures, ground uplifts, liquefaction (when the earth mixes with water and turns to a quick sand like substance); floods and landslides. The earthquake was felt in all nine provinces, covering approximately five hundred miles. Every building felt the effect, and it was reported that only ten to twenty percent of building walls remained standing. In some areas, large quantities of water flooded areas to form canals. Almost every religious temple was destroyed, and in some towns over fifty percent of the local population was killed.

While we have had many disastrous earthquakes throughout history, we will also continue to experience them. We may try to be prepared and think we have a plan, but as long as we build and populate areas that are affected by earthquakes, we will suffer the consequences.