There has long been a problem using the lithium-ion batteries for electric car energy. While cost is a major issue, there are other areas that make them less efficient. This has been a conundrum for the automotive industry and it seems Toyota has made a complete change of focus with their new Lithium-Air solid state batteries. 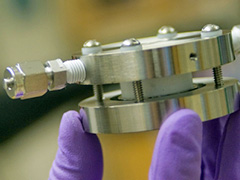 There is actually an entire family of lithium-ion batteries that are in use in the mainstream world. Lithium-polymer and lithium-iron-phosphate are the most common in electric vehicles, but there are also lithium-cobalt batteries. The problem with these is not only the high price tag, but the fact that most of the weight of the batteries has nothing to do with the energy storage itself. Toyota has been doing extensive research and development on the next generation of all solid state and lithium-air batteries. Both types of batteries will catapult the world of energy storage into new realms.

The benefits of all solid state batteries have the potential for much higher performance and the technology itself brings a higher level of efficiency with less weight ratio. The Lithium-air batteries bring a theoretical potential capacity of energy storage to fifty times more than your average lithium-ion battery. The Lithium-air batteries actually use oxygen in the air as the active cathode material. They bring a much higher energy density as well as the additional weight savings.

The advancement in study, research and ultimate development of the two most promising battery types have allowed Toyota to announce their plans for use in their electric vehicles by the year 2020. The technologies are very promising and will bring higher energy capacity with lower weight and costs to the general electric vehicle industry. This means a better savings for those that buy the cars, longer battery lifespan and lower costs in replacing the batteries.