California always remains at the head of the class when it comes to innovation and embracing new concepts. But, while they may house almost thirty biofuel companies, there are a lot of other states that are catching up with the emerging and economically beneficial idea of biofuels. 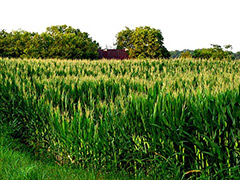 Currently, there are around twenty seven states outside of California that have over eighty advanced biofuel companies. The top states and number of companies that are supporting biofuel are: eight in Illinois, six in Colorado, five in Texas and four in Iowa. E2 (Environmental Entrepreneurs) have created a state-by-state breakdown in a searchable map of the companies involved within the advanced biofuels industries. The site offers a kind of information clearinghouse on the methods that clean fuel companies are using to increase economic growth and the potentials for our domestic biofuel industry.

The facts sheets from E2 are indicating that in the next decade, the biofuel market could be worth over $60 billion and bring with it over 18,000 jobs. This could be accomplished within the twenty six biorefineries that are expected to be online by 2015. Other details included in Fuelinggrowth include the fact that advanced biofuels can be produced on sustainable levels without the mis-information of food competition. The farming community is discovering a number of revenue opportunities for the agricultural waste and new technologies are being developed to create cleaner fuels. This means that biofuel refineries are now appearing all over the country.

According to reports by E2, the United States and the Canadian biofuel production capacity experienced an increase from the 2011 numbers of 427 million gal to over 685 mil gallons in 2012; with capacity increase expectations set at 2.6 billion gal by 2015. States use a variety of ways to encourage the integration of a clean fuels mix. Some offer tax incentives, while others, such as Oregon and California have an LCFS (Low Carbon Fuel Standard).