One of the most non-polluting and also the cheapest sources of power is hydroelectricity. It’s true that it may cause some initial ecological damage, but it has much better compatibility with the climate than other major forms of energy, such as coal, gas, nuclear power, and others. For some top hydroelectric power countries like China and India, which have enormous energy needs, hydroelectric energy sources are the only remaining options among the sources that do not contribute to global warming. (Is global warming fake? Read here - click here). 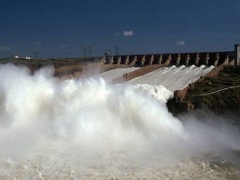 The National Renewable Energy Laboratory carried out a survey, which concluded that all hydroelectric power plants worldwide have a total electricity production capacity of 6,750,000 megawatts. This capacity translates to an annual 2.3 trillion kilowatt-hours of electricity, and it is enough to meet the electricity needs of almost a quarter of today’s global population (over a billion people).

The U.S. alone has more than 2000 large, medium, and small-scale hydroelectric power plants. Hydropower in the United States comprises almost half of the renewable energy sources’ total installed capacity. In 1920, about 16 billion kilowatt-hours of electricity was produced by hydroelectric power plants. In 1999 this figure increased to 306 billion kilowatt-hours due to the formation of efficient commissions as steps taken by the U.S. government.

Many countries in the world are striving to utilize renewable energy (To find out about the top 8 clean sources of energy to replace oil by 2050, click here) in an efficient way, and have high hopes for hydroelectric power towards the middle of the century. However, today’s hydroelectric production is dominated mainly by a few nations. The following is a list of nine top hydroelectric power countries:

For more information on hydroelectric power, go to:
http://en.wikipedia.org/wiki/Hydroelectricity
http://www.therenewableenergycentre.co.uk/hydroelectric-power/