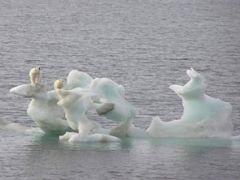 
1) Some statistics can be misleading or contrary to global warming:
Due to local climatic variations, some glaciers in Greenland and Antarctic ice have been shown in the last few years to be actually getting thicker, not thinner. All we ever hear about is the North Pole, but never about these other two important indicators of global warming.
NASA was once caught red-handed faking data about global warming. They simply took the temperature data for September and used this to give the official record of the temperature in October that year, and then claimed that October was the hottest year for decades.

2) We are being lied to for personal gain:
A few decades ago, back in the 70's, the same governments and scientists tried to scare us with stories of the impending ice age, and now we are supposed to listen to similar false fears.
Many companies made a lot of money from the ozone layer scam. This has also since proven to be false, but the media which gave us a big scare at the time has since remained silent.
Everyone knows that big scares always mean big profits for government connected companies. For instance, GE owns NBC, which is brainwashing us with constant global warming stories. However, GE makes a huge profit from the sale of green products such as windmills and solar panels to governments.

3) Natural factors are much more important than man-made factors in realising CO2 into the atmosphere:
The ocean and volcanoes are much bigger sources of CO2 and other such greenhouse gases than humans. If the CO2 count is increasing, the influence of man may be minimal.

Is global warming fake? Ask the top independant scientists (for instance, the fiercly indendant scientists from the Oceanography research institute, Southampton, Uk) around the globe and the answer will be a unanimous NO! The influence of man is in fact NOT minimal, with CO2 and methane increase in the atmosphere directly connected to man's activites over the last few decades. "Why is global warming fake" should really be read "why are certain media outlets so irresponsible?"

For more info on global warming go to:
wikipedia
globalwarming.org

9 Responses to “Is Global Warming Fake?”