The melting of the arctic ice cap: disaster for mankind and the earth

The loss of the arctic ice cap also means warmer temperatures around the globe, and this can also spell serious trouble for food crops and farmers. Winter crops may not grow if the temperature does not get cold enough, and this can be affected by a change of just two or three degrees. A four degree temperature increase in the winter could cause winter wheat crops to fail all across the Midwest in America, leading to a global food shortage. Summer temperatures will also be higher, and the moisture will be less. This means drier soil, which requires more water to grow the same amount of crops. This could cause a global water crisis, like those seen at times in the southwestern area of America, where water is in short supply and must be rationed. This can lead to the failure of crops to grow in warmer months. also causing the global food supply to drop dramatically. 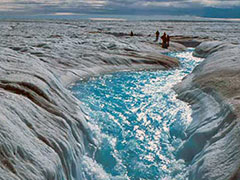 The melting Arctic ice cap brings many different things to mankind, and very few of these are beneficial. For the first time since man has been to the North Pole, this area has become an island because of the ice that has melted away. Satellite images taken from space show that melting ice has caused the passages to the northeast and the northwest to open up. The melting arctic ice cap has a profound effect on the entire planet, not just the arctic area. When this ice melts, it flows into the oceans, doing two things. First the ice raises the sea level because of the increase in water, and the cold water can lower the temperature of the seas around the world. Our environment and entire global ecosystem has a very delicate balance, and both of these factors upset the natural balance of the earth. When sea levels rise, coastal areas and their populations can become flooded, causing acres of farmlands and homes to be completely destroyed and covered by water. This can lead to a severe food shortage, and this shortage may affect much more than just local populations. A large percentage of food crops are grown in coastal areas, and if these crops are not available then many food prices will rise and these foods will be harder to find.

Another effect that the melting arctic ice cap causes that has a big connection to mankind is the decrease and even elimination of species that the whole local ecosystem depends on. The krill populations have decreased significantly in the last twenty years in the arctic areas, and this is caused in a large part because there is less sea ice, which provides a home and rich feeding ground for Krill. Less Krill means fewer fish and other marine life that feed on Krill. Commercial fishing in the area, which is a major revenue and food source for both individuals and businesses, will see a decline in the number and types of fish caught. The loss of Krill can lead to a decrease in the population of a large number of other marine species, and may cause some marine life to leave the area, including whales and many species of fish.
The melting arctic ice cap is a warning that we need to stop polluting and harming the earth. This means conserving energy, using clean environmentally friendly energy sources instead of burning fossil fuels, and doing our part to keep the earth in good condition for all the future generations to come. If the melting of the arctic ice cap accelerates, the entire world could be in jeopardy, but we can take steps to stop the melting arctic ice cap before it is too late.

6 Responses to “The melting of the arctic ice cap: disaster for mankind and the earth”