Solar power plants may save humanity

Fossil fuels cause many problems such as global strife, high fuel prices, environmental harm, high transport costs, and many others. Solar power plants could be the answer to all of these problems because this renewable energy source can help end dependence on fossil fuels by offering a substitute energy that has many benefits and almost no disadvantages. We build solar power plants to lessen the strain on the earth and damage that we do daily by burning fossil fuels, clearing the rain forests, and other methods that can cause irreparable environmental harm. Solar energy is clean, safe, and abundant. No one on earth will need to be dependent on other countries that can threaten to cut production and raise oil prices at the drop of a hat. 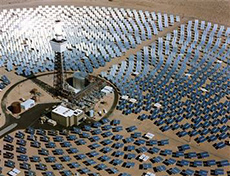 Solar power plants may be the answer to global warming by helping stop the release of excess greenhouse gases into the atmosphere. Solar energy is one form of renewable energy that is environmentally friendly and does not use fossil fuels or contribute to harmful carbon emissions. Solar power plants are the fastest growing renewable energy source around the globe with a limitless supply available. Solar energy has come a long way in the last few years, and today, this energy is reliable, efficient, and affordable.

We build solar power plants for many reasons; these include costs, which are competitive, an abundant supply of energy, a stable and secure supply of energy, it is more environmentally friendly than other energy sources, and it provides for cleaner air due to a decrease in carbon emissions and a reduction in global warming.

Our dependence on fossil fuels is at least partially responsible for global warming because greenhouse gases, particularly carbon, are released when fossil fuels are burned and get trapped in the atmosphere of the earth, which makes the earth warmer. As inhabitants of the earth, we need to stop putting such a strain on it. The way to do this is by using alternative and renewable energy sources like solar power.

Solar power plants may be the future of energy, a future that is friendly to the earth and the environment. There are two main solar technologies that have been developed that can be used right now to minimize or eliminate fossil fuel usage; these are photovoltaic solar energy and thermal solar energy. Solar power offers many benefits that include independence from fossil fuels, power sources that are diverse, lower energy prices, higher employment rates, better local economies, and energy sources that can be close to where they are needed, minimizing needed transportation.

We build solar plants for the benefits they offer. The United States produces and uses the most solar power in the entire world, but we can do much more because even with this fact, less than 1 percent of the electricity in the United States is produced using solar energy. Until recently, many people did not want to use solar energy because it was considered unpredictable and expensive, but this has changed. Photovoltaic panels are installed on roofs or other structures. These panels transform sunlight into electricity. Technology and research have come together to make solar power affordable and reliable, and this has allowed solar power plants to be built and to operate.

3 Responses to “Solar power plants may save humanity”