proof of global warming and climate change is in central Peru’s shrinking tourism dollars as the nation attempts to re-purpose its melting Pastoruri glacier. 16,000 feet high in the Andes, the Pastoruri glacier was once a frozen spectacle that justified the hour-long flight from Lima and then another hour's drive from the regional capital Huaraz. This icy hub for snow sports and vacationers could bring in more than 100,000 visitors per year in its prime ensuring a better standard of living for the mountain locals of Cordillera Blanca. The view was so bright that sunglasses were necessary to prevent snow-blindness.

But now, Pastoruri has melted down to a third of a square mile—half its normal size after almost a dozen of the hottest years on record. This isn’t only a sad reminder of global climate change. It’s also a serious threat to the Cordillera Blanca economy as a mere 34,000 visitors came through last year compared to the heydays of the 1990s. 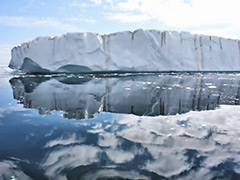 That’s why Peruvians are trying to turn it into a global warming museum attraction. Instead of a winter resort location, Pastoruri is now being marketed as a live measure of global warming—a sort of surreal nature walk laden withvarious examples of environmental change in action.

According to MitraTaj’s article on ScientificAmerican.com, “Visitors pass marshes and ponds red with rust as they walk over a hill that was once ice,” and ,“Newly exposed rocks have also revealed fossilized marine species that likely last saw the light of day before the start of the last ice age - more than 100,000 years ago.”

Undoubtedly, the challenge for the residents of Cordillera Blanca will be to make the made-over attraction interesting enough for casual travelers and scientific laypersons. But, it’s an admirable route in its pragmatism, nonetheless.