Should We Switch to Hydrogen Vechicles?

Hydrogen as a fuel for vehicles, and power for electronic devices and other power needs, offers a lot. The only byproducts created from hydrogen fuel cells are heat and pure clean water. Hydrogen environmental benefits far outweigh traditional vehicle benefits, and there are no harmful emissions or byproducts which can harm the earth or the atmosphere. Hydrogen fuel cells are a renewable alternative energy source, and there is no need to dig or destroy the earth in the process. Hydrogen is not naturally occurring in nature, it must be extracted from other elements in a process that does no damage to the earth or environment. Switching to hydrogen vehicles right now is not very possible, but with some careful planning these cars could be the transportation of the future. 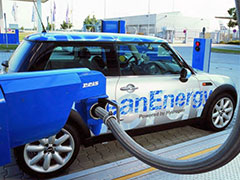 One reason why it would not be possible to switch to hydrogen motors on a wide scale is the lack of refueling options. There are no hydrogen refueling systems available in the United States, so these stations would have to be built or converted. The fuel used in the fuel cells can be hydrogen or another fuel, depending on the specific fuel cell, such as methanol. For hydrogen motors to be widely used, drivers must be able to refill their fuel in the fuel cell. Right now there is no infrastructure in place to do this. These are not insurmountable problems, and can be resolved with some careful planning and thought. Hydrogen vehicles right now are not comparable with other fuel types because it requires large amounts of hydrogen gas to allow the car to travel even medium distances, and so vehicles with hydrogen motors do not get the same distance as other fuels can give. There is a lot of research and development going on concerning the storage of the hydrogen, and new technologies may be developed which make hydrogen vehicles capable of traveling further.

Hydrogen vehicles do have many benefits over traditional fossil fuel vehicles. Hydrogen fuel cells are a completely clean energy, and it does not contribute to air pollution. Hydrogen motors actually have zero harmful emissions, which most other alternative fuels have small amounts of. Hydrogen vehicles do not cause global warming to become worse, and there are no carbon gases. The cost of hydrogen transportation is high right now, but as more hydrogen vehicles are created and the process becomes more streamlined these vehicles will get cheaper. Chicago has hydrogen transportation buses that use hydrogen fuel cells for demonstration purposes. Other cities have also considered similar projects.

2 Responses to “Should We Switch to Hydrogen Vechicles?”