Ormat Technologies – The Geothermal Heavyweight, but Is It a Wise Move for Geothermal Investors?

Out of all geothermal companies, Ormat Technologies is a giant. The only company that even comes close to matching Ormat is Calpine (CPN), in terms of being an independent power producer (IPP). However, Calpine cannot rival Ormat in any other way. The main business of Calpine is power production, and geothermal energy accounts for less that one percent of that. Ormat, on the other hand, is the standard for the turbines ‘Organic Rankine Cycle’, which are used in producing electricity from the lower temperature geothermal resources. 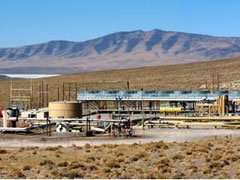 Ormat Technologies was built around core technology – the Ormat Energy Converter (OEC). It all began in 1972, with the company commercializing Organic Rankine Cycle technology. Also referred to as ORCs, this technology has been tested and customized to various real weather conditions, and it has a proven track that is decades long in remote power, waste heat recovery, and geothermal power. The most recent quarterly report that Ormat Technologies released states that 90 percent of installed binary generation is done through OECs, and this number includes all ORC generators.
The large size of Ormat Technologies, as well as its extensive experience of managing and developing geothermal reservoirs definitely play in the company’s favor over other geothermal developers. The current credit environment is tough, and Ormat is much less dependent on loan guarantees from the Department of Energy so that it can get geothermal project financing, which is not the case with smaller players. Ormat also has internal expertise that encompasses all stages of generating geothermal energy, like development, exploration, and operation. The smaller companies can only get such expertise through hiring outside contractors, and Ormat is often one of the contractors they hire. The scale of the company, as well as its significant number of developing geothermal projects allows for some diversification, so not all of Ormat’s capital is invested in one risky development prospect.

With all this being said, keep in mind that Ormat Technologies is already large and prominent in the industry. Especially with its listing in the NYSE, Ormat is not one of those companies that will increase in stock price because it will be the latest discovery by any new investors. Increase in stock value will be forced to come from internal changes resulting in the growth of the company. Also, there are some investors that are finding it difficult to justify Ormat’s current stock prices and don’t think it is worth the investment with little to show the dollars will grow soon. Although this article give you the basics, you should do some additional research into this company in order to decide whether it is worth it for you.